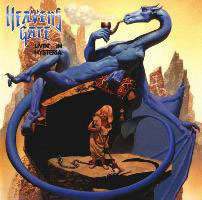 Truth is the two “Keeper…” albums released by HELLOWEEN in the late 90s raised high the bar of  the quality a Euro Power Metal LP should now have to exceed recognition – and sales – but also made many fans skeptic in regards to why rawness should be replaced by overloaded melodies, provided we were talking ‘bout a the Metal genre. The American Power Metal bands had long now offered technicality in defense of releasing sophisticated music (even including major Thrash Metal outfits) and it was a matter of time for Europe to have its answer to this manifest.

HEAVEN’S GATE formed in Wolfsburg, Germany in the mid-to-late 80s and from the very beginning of their career they showed their teeth into making Metal music that was divided in both furious and melodic moments. The band’s “In Control” debut album was hailed with rave reviews, I can recall, and the crucial second LP was about to come in 1991 with “Livin’ In Hysteria” issued via the soon-to-go-bankrupt No Remorse Records. This is not said as a tiny detail since at the time major record labels in Germany – think of Steamhammer or Noise – had enough money and time to invest on their bands in order to make them headline news in the Metal Press, something that never happened with bands like HEAVEN’S GATE or some other outfits (CHROMING ROSE just popped to mind, huh…) from the Central European region.

Nonetheless, with “Livin’ In Hysteria” the German quintet shoed how intelligence can blend with Metal mastery in order to come up with a ‘multi’ Metal masterpiece. And I say ‘multi’ because there’s no fairytales here or songs about dragons and steel (at least not throughout the whole album, haha) but the lyrics contents speak about various themes and subjects, something that was quite rare at the time. Apart from that, the music is the ‘ace’ point in here; tons of riffs that prove how you can write smart music without losing your metallic feeling, lead themes that prove you can rock without being credited as a virtuoso, a pounding rhythm section that spits fire in easy without sounding complex and ‘prog’ and some really intelligent and charismatic lead vocals that in one hand tie adequately with the music’s spirit while at the same time sound soaring and separated as a lone musical instrument.

I believe that the world of Metal was bound to give “Livin’ In Hysteria” the success the band was thirsty for, provided that HEAVEN’S GATE was signed to a different label. Without the promotion and distribution needed in those tough days – don’t forget we’re talking about the early 90s with the first signs of commercial wear for Heavy Metal as a part of the music business - it was difficult for these Germans to overcome such difficulties. A new deal with Steamhammer in 1992 would not save the day and the band split up in 1999... Guitarist Sascha Paeth went on to become a successful producer and what we all now hope is that some kind of reunion will take place at some time in the near future, even for a set of selected live dates!