Today, the band is debuting the music video for their first single, titled "The Forever Serpent", which is based on the MTG bad boy Nicol Bolas. Watch it below.

Jason Ashcraft explains the creation of the project: "For those who follow HELION PRIME understand that parting ways with Sozos was due to unfortunate struggles with visa issues as he lives in Cyprus, but I knew someday we'd work together again I just wasn't sure how. I then got the idea to start a band based completely on Magic The Gathering lore because between HELION PRIME and DIRE PERIL I think I'm good on sci-fi based material and why wouldn't I need ANOTHER project. When I first heard the song Sozos had written for us I immediately knew it had to be about Nicol Bolas."

Sozos Michael adds: "I am beyond excited for the release of "The Forever Serpent", our first creative output with Jason since our collaboration in HELION PRIME. As you will surely notice listening to the song (and/or watching the music video), we channeled our most primal nerdiness to this endeavor, and we have no plans to slow down! We have just begun exploring the rich and deep lore of MTG, and we are excited to see where this journey will lead us." 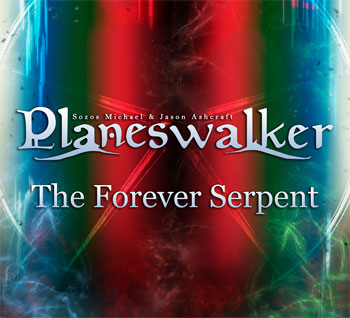