The NOCTURN project was started in 2007. Founded by Seb and Vince, they teamed up with some of their metalhead friends and the band gathered to play extreme music with brutal and melodic riffs melted with harmonies and orchestrations, an expressive sound charged with undefined emotions. The band mix many influences such as CHILDREN OF BODOM, DEATH, DIMMU BORGIR, SEPULTURA, CRADLE, MAIDEN, DREAM THEATRE, ANGRA, GUNS’N ROSES, Bach and many others. The members of the band are Vincent on the lead vocals and guitars, Sophie on lyric and harsh vocal harmonies, Sébastien on keyboards, Léo on lead guitar and background vocals, Mathieu on the bass and finally Florian on the drums.

NOCTURN play a melodic Death/Black Metal which is epic and powerful, with dual male/female vocal orchestrations where guitars and keyboards entwine in dark harmonies. All the various influences meld with perfect chemistry between the members to create their own unique sound. Their debut album from NOCTURN is entitled “Like A Seed Of Dust” and will be released by Sliptrick Records in the coming months. 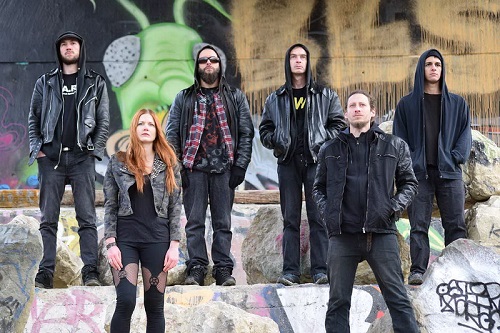