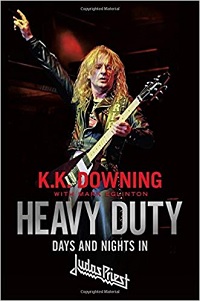 Having the JUDAS PRIEST logo on the book's cover and the iconic figure of K. K. Downing should be enough to convince you to get this book. But if you have being following what happened among the ranks of this British Metal behemoth after the “Nostradamus” album release, then seeking answers how the farewell tour turned into two full length albums can potential shadow the aforementioned reasons. To top this off, K.K. parted ways with PRIEST and the trained brain should suspect that there should be more reasons than just a retirement decision.

With all of the above in mind, it kind of makes sense why the one part of the most iconic guitar duet in Metal decided to release his bio. Although, in all fairness this does not read as an autobiography (this word is nowhere to be found outside the book), so I guess it was just me feeling a bit let down. I was expecting more details on the making of this band and especially on the creative process that gave birth to a series of genre-shaping albums which by the way still give me goosebumps in concerts, but also when spinning on the turntable. Contrary to my expectations, K.K. seems that he wanted to set the record straight (from his own perspective) about what happened from the first day he put JUDAS PRIEST together until the day he chose to leave. I am not going to give any spoilers here, but, suffice to say, I was shocked to learn from his writing that what appeared to be a solid lineup from the stage was almost smoke and mirrors. As you understand, there is some blame to go around and, as it happens in similar cases, K.K. is telling the story from his perspective, so keep that in mind if you choose to pick sides (this is rather pointless, right?). With that being said, I enjoyed reading his narrative which is presented in easy to access English. With that, I mean that the language is not the typical British with all the idioms, the slang the always welcome humor but I suspect that the text was filtered or even post-processed by the seasoned biographer Mark Eglinton to make it more accessible. Strictly from a personal point of view, I would prefer the text to sound more British, if you know what I mean.

Passing the first chapters which briefly touch upon K. K.’s childhood, comes the meat of this book which is JUDAS PRIEST of course. K.K. is not afraid to criticize some of his and the band’s decisions and this seems to me as being brutally honest, something that I totally appreciate. Still, flipping the last page I was left wanting to learn more about the “Better Than You, Better Than Me” litigation, the creation of - what I believe the most complete PRIEST album - “Nostradamus” and how things evolved after “Painkiller”.

At any rate, K. K. is a huge chapter in the history of Metal and therefore, getting all these bits of information scattered in this book feels like adding the missing pieces of the puzzle every PRIEST fan was putting together with every album release and every concert he / she attended. After all, getting a closer look into a band after the stage lights are off is what makes books like this a must-read.

+Pros Simple writing, without too many British idioms (this could easily be a con for some), gives a decent amount information with some personal information.

-Cons The scope of this book feels more like it was to explain why K.K. left PRIEST and less like an attempt to capture a big chunk of Metal history on the making.