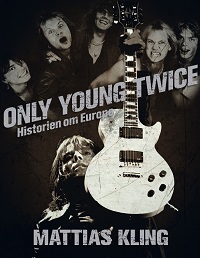 There is one official Biography written about EUROPE already, ”Den Stora Rockdrömmen” (Free translation; The Big Dream Of Rock). This one though was published in 1987 so there ought to be some room for one more. Especially since EUROPE’s career had only started at that time. But no, this is not a biography, this is a history book about Sweden’s biggest band, how the journey started in the Suburbs of Stockholm and took them all over the world. The research done by Mattias Kling is fantastic, there are many and different sources that has built the story. One of the most impressive things is the references and quotes from local daily newspapers regarding concerts here and there and also references to record reviews from the same media.

Much of the story comes from Anders Tengner, who actually wrote the official biography in the 80’s and since he was both a journalist as well as tour manager to the band, the stories are bound to be true. Ok, there are no real scandals in the book, instead the focus has been on how the band was run, by Thomas Erdtman and Joey Tempset, leaving a rather small space for the rest of the members and it’s also describing the professional intrigues happening in the glory days. Other Swedish journalist who did a lot of covering of the band has also contributed to the story. So the details are there and the book holds a consistent story which flows in a very good way.

The downside though is Mattias language; sometimes it feels a bit too complex to float smoothly and other times I had to re-read sentences, not that I didn’t understand it but it felt like words was missing on occasion and sometimes it took a while to get the flow in the wording. Also, the latter half actually lacked words, which should have been caught in the editing, some if’s, of’s, but’s etc. are missing. And of course, the absence of band members comments and participation makes the book just a document of history. I have to admit I absolutely prefer the personal touch that a biography brings. This was especially clear since I’ve also just read Kee Marcello’s bio, which of course lacks some in writing technical performance but definitely makes up for it in personality. That book is also used as reference to this story but at the same time weighed with the other side or some facts from other sources to validate or shoot down Kee’s story.

Anyway, the book is very interesting reading since it holds so many details and really analyses what could have been done differently to grant EUROPE an even higher ranking in the world of Rock. It’s of course easy to look at this 20 years down the road but it’s still very interesting. It also is a great document over how it looked for Hard Rock and Heavy Metal in Sweden in the 80’s. Not even when EUROPE reached #1 on the charts in Sweden, media wanted to acknowledge that. But the fans of course loved them.

The book only seems to be available in Swedish, which is a shame because it is, as already said, very interesting reading.