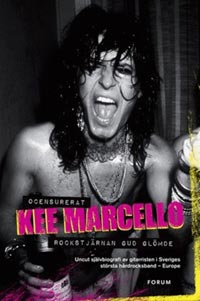 Kee Marcello is not only well-known in Sweden even though it has been more than two decades since he was on a world tour as the guitar player/superstar of EUROPE. It’s been rather quiet around him since his days with the super-group but he has stayed in the music scene all the time actually.

This book is Kee’s or perhaps Kjell’s own story about how he started with music in the 60’s and 70’s in the small town of Umeå at the northern parts of Sweden, his journey learning to play the guitar and about finding the influences from the contemporary bands and guitar heroes. It also describes his struggle to reach the big scene in Sweden which means a transfer to the capitol, Stockholm and how he got into the scene with skills and determination. Of course, I already knew much of the story since this happened when I grew up but far from all of it.

In biographies, the road to fame is normally just filler until the real action starts but not this one. This book was written in a more spoken-word kind of language and rather simple and funny elements that make this a total joy. And of course, the mishap when he was chosen as the new guitarist and vocalist of the Swedish pop-phenomenon NOICE and how they, realized when the hit the studio that Kee’s accent couldn’t really go with the slang style Stockholm dialect the band had as trademark was a hilarious story. And there are more of them in this book.

Sure, his career in Hard Rock is the most interesting, through the days of EASY ACTION and Swedish Metal Aid until he was drafted for EUROPE. The cover quotes promises a book filled with Sex, drugs and Rock’n’Roll that will make the infamous MÖTLEY CRÜE biography “The Dirt” look nice but I’m not sure about this. Ok, it contains all of this but not wrapped in fluffy and fancy words. Northern folks are known for using few words so I assume, reading this book outside of Sweden, it may feel rather blunt and way too brutal when compared to books written by real (no offence, I like this one a lot) authors.

Of course, reading always feeds my interest and since there are a lot of videos available on internet it was time for some more digging. I mean, how can you resist looking at a documentary about EASY ACTION produced by Swedish television in the 80’s (EASY ACTION - “A Hot Summer Night”)? And then some more recent stuff and for sure, I realized with this how damn good a guitar player he is. I never really gave him a chance since all my friends were on John Norum’s side you know…

Since the book was written by Kee together with journalist Stefan Johansson it is very personal and feels truly genuine. It’s stated that it should be the real and true story which is very easy to believe while reading it.

So with this, it’s absolutely one of my favorite biographies read ‘til today and it’s absolutely the most personal. The downside is that it’s modest in the Swedish way when it comes to the language, and even if it’s very direct and keep to the story all the time, it feels a bit sort and cut on a few occasions.

+Pros The personal touch and honest feel, the story is direct and concise.

-Cons The language is rather simple and sparse on occasion.