"Unto The Locust" has already been included in many top album lists for 2011 and MACHINE HEAD are gearing up for the 2012 US tour. So, some days before getting onstage METAL KAOZ got on the phone the band’s drummer Dave McClain to get some inside info for this great album and learn what is already planned for MH's schedule. As the fans are saying MACHINE fuckin HEAD. 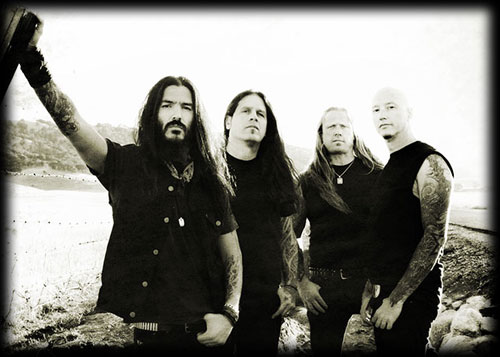 Hey Dave, how are you?
I am good, Dimitris, thank you.

MACHINE HEAD are working on a DVD release, is that correct?
Obviously, you are talking about the DVD that we were planning to release after ‘The Blackening’ tour. That tour was extremely long and lasted 3 years so after getting off this tour, we were ready and anxious to start working on the new album so we kind left all the DVD plans behind us. I am not sure whether this will come out in the future. We had come to a point that we needed to work on music making.

In a recent interview, Phil talked about some problems the band had during ‘The Blackening’ tour and he actually said that MACHINE HEAD almost broke up. So, what did happen?
Yeah, there was one time in particular in Paris during the SLIPKNOT tour; Robb and Adam had some pretty serious problems and after we got off stage that night, Robb was ready to call it a day and just end everything right there. But he and Adam did some therapy together and kind of worked things out.

Did you think that getting into a long tour like you did, would probably take a toll on the band?
Well, we did not know that the tour would stretch out for that long. And then album snowballed into a big thing, something that all of the bands hope for, so we did not think that it would be/cause a problem. When we went on the road with METALLICA, the tour got an additional year, but to tell you the truth, it wasn’t that hard, since we had two weeks on the road and two weeks off; so there was time to take a break and get back home. After all the band was not constantly on the road for the entire period of time.

And that also means that you did not need to take some time off after the tour, before starting working on the new album, right?
Exactly. After the tour, everybody went home to be their families; Robb has a family Phil has a kid so they spent the break with them. And one day Robb called me up telling me he was ready to go. So, we started practicing and rehearsing stuff and bouncing ideas.

How long did it take you to write the music for “Unto The Locust”?
I think we started in May 2010 when me and Robb got together and finally we entered the studio in April; so, I’d say it probably took us 10 months to have all the songs for the album completed or I’d say almost completed; since a song is not completed until the last day just before it gets recorded. Robb always changes lyrics or adds new melodies so we are constantly working on different arrangements or trying new ideas. Even if we have the basic structure of a song, there will be changes in the last moment, before getting in the studio to commence the recording sessions.

How can you be sure when to stop working on a song and start recording it?
It kind of depends on the occasion; some songs come together really fast and it seems like they write themselves. And then you have other songs  where, something does not feel right and we have to try to find the missing piece. In the end, it is just a feeling that tells you that song is ready. Still, Robb is a guy who constantly has new ideas and always thinks how to make a song better. To really understand what I am saying, I will tell you that he was changing vocal melodies while the album was being mastered and mixed. Thank god that you cannot change something that is already done because probably he would be changing stuff to make things better after the album had been released… (laughs)

This can be a nightmare for the record label…
(laughs) Yeah, it can sometimes be! The release date is something a like a warning for us: “You really have to finish the album or we’d have to change the release date” and that is not good...

Does this also mean that you have a lot of stuff that you had to leave out of the album?
We have actually two songs that didn’t make it in the album, even though musically they were done. But Robb was not happy with the lyrics and some of the vocal melodies. Maybe these songs will be released at some time in the future and I really hope they will. There is one that I wrote the music for and has Robb on the piano and some of the orchestra stuff that was on the album.

Do you think that those songs will be out as part of a special edition, as a single or in the next MACHINE HEAD album?
I really don’t know. I would really like to see the song with the piano to be on an album instead of coming out in a special edition. The second one is a heavy song and can be a bonus track. But the first one is really special for me; I wrote the music some days after my mom had passed away, so it has a special meaning for me.

Or you could even do a special live show with acoustic versions…
Yes, that would be also cool and to tell you the truth I have proposed this to Robb and in particular to perform “The Burning Red” acoustic. Just an acoustic guitar on the stage... yeah it would be cool!

Yep, that would be nice. What was your input in the making in the new album? I mean, what are the changes in your drum work as compared to the previous album?
I’d say in the last two albums I kind of play a little more. I guess the best way to describe this is by saying that I was influenced by Keith Moon whereas in the past I was a drummer who had everything mapped out by the time we got into the studio. I still do this but I also like to try different things and even over-play a little bit. It’s like a natural progression to my playing since “Through The Ashes Of Empires”. Like I said, I am trying to channel a little bit of Keith Moon in.

Does this also mean that you have a certain degree of freedom when MACHINE HEAD are writing new music?
Absolutely, when me and Rob start working together, he will always propose stuff that I have never done and even sometimes challenge me to try something new. So, we have total freedom to do whatever we want.

The US tour is up ahead, so did you have anything to do with choosing the bands to go on the road with?
Yes, we always think of what bands to bring along in order to form a good touring package but also  to get along well with. Just like with SUICIDE SILENCE that we have already been on the road together, during the ‘Mayhem’ tour with MEGADETH, plus we are friends. The same goes with THE DARKEST HOUR guys that we did the European tour together. For the first band on the billing I'd say that we had met with Bruce Dickinson’s son Austin a couple of times before, so we knew that RISE TO REMAIN would be a strong opening band. I am sure it will be cool! And sometimes we want something different on the billing, like we did when we had BRING THE HORIZON with us. I mean, there are heavy but still their image is something different from MACHINE HEAD.

What about the setlist? What can we expect on this US tour?
We’re going to play about two hours. The set that we did in Europe lasted one hour and fifty minutes and felt really great. We really love that set and every night after we’d come off stage, it felt like we were just playing for like an hour instead of two. So, I am not sure if we are going to change or add something.

Will you be changing the setlist concert by concert?
Well, it is really difficult to make a lot of changes since we want to have one song of each album and there are songs that simply cannot be left out, like “Bulldozer” from the “Supercharger” that really gets the crowd going or “The Blood, The Sweat, The Tears” that is the song we like to play from “The Burning Red”. We might change it a little bit by replacing “Ten Ton Hammer” with “Take My Scars”, bring some other songs from “Burn My Eyes”. I am sure we will.

Yeah, you should! So, after this US tour, you have Australlia’s ‘Soundwave’ and then?
Probably we are going to do a second US run and visit places that we haven’t for a long time like North Dakota or Oklahoma. And then we will go to Europe for the summer festivals.

What about Canada?
We have a couple of dates in Canada in the current schedule but we definitely want to go there and do a full tour.

That’s cool Dave, thank you for your time. I want to wish you the best for this year and the upcoming tour. See you in Chicago!
Awesome man, have a good one and see you there!