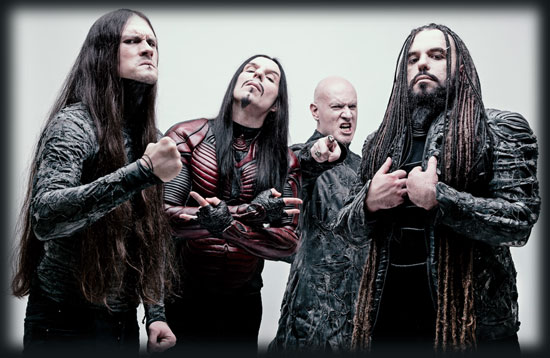 SEPTICFLESH did an amazing show in Mexico City last year, performing with a live orchestra and choir. Fortunately, the band documented this historic night, and “Infernus Sinfonica MMXIX” will see the light of day on July 31st. METAL KAOZ got Christos Antoniou on Skype to discuss about this release and get an update on the next SEPTICFLESH album. Are you ready, Titans?

Hi Christos and welcome to METAL KAOZ!
Hi Dimitris, I am sorry for the delay; the previous interview lasted longer than planned.

That’s OK, I can manage the time to get you back on track.
Thank you!

Let’s start right away then; why did you choose Mexico City to film ”Infernus Sinfonica MMXIX”?
I have been asked the same thing in every interview I have done. That’s a shame for the Mexicans because they were most professionals especially when they made an offer for this. Their offer was the most practical than all the others we had received, and therefore we decided to do it there. When we were on tour in North US, 1.5 - 2 years ago, a promoter reached out asking to do the show. He is a SEPTICFLESH fan but also a musician – he is a tenor and he was part of the filming – and that helped me a lot because I was able to communicate more efficiently with someone who knew about music.

It is extremely important to say the reasons why you chose Mexico City because there have been so many stories about Latin American tours getting cancelled about promoters who did not keep their side of the deal and so forth. So, it is great to hear you saying this to underline that not all shows / tours in Latin America can go bad.
Absolutely. There are such problems everywhere.

On top of this, the Latin American metalheads are closer to those in Central Europe and especially to the Greeks. They share the same passion for music and Metal.
Yes, I agree. They did a great job and, being honest, I have to say that I was a bit skeptic in the beginning, but I am happy to say I was wrong!

Just by watching the video trailer, I can tell the show was massive and impressive! Did you face any difficulties to put this production together?
I know that this project looks like it was very difficult to pull off and accomplished. But, if you work hard and in an organized manner, you will succeed. The choirs and orchestra had ample time to rehearse on their own, plus, I had provided them all the music scores along some news orchestrations, like in ”Anubis” and ”Persepolis” among others. So, before the day of the show, they had time to get prepared. In January of 2019, after finishing the North US tour with ENSIFERUM, we went to Mexico City to rehearse just three times.

Did you rehearse along with the orchestra?
Yes, we rehearsed three songs in the morning of the day of the show. What I am trying to say is that if you have a solid plan and you are following it to the letter, you will be successful.

You did all the prep work by sending the scores and having done the appropriate adjustments to the music.
Yes, the foundations had already been laid, although there were not that many changes to give us a headache.

How was it performing during the show thinking about the filming and having the orchestra and the choir at the back? Did you feel stressed at all?
Oh yes, I was stressed and also because I was the one that had made all the decisions regarding the orchestra. I have to say though that I was not the only one who worked hard on this; the rest of the band worked hard also. Fortunately, everything went great, although I have to admit that I did not enjoy this as I much as I could have, because of all of this. However, I was extremely happy after the end of the show.

I can only imagine, man! The songs I see on the tracklist are the ones that you played that night? I mean, did you exclude any?
We did not cut something. We included everything we did that night and we tried to have a ‘best of’ selection from the last four albums. We had 90 minutes to our disposal and I believe we made the best choices because there were other things that we had to consider. For example, we could not have played ”Babel’s Gate” easily because there are a lot of things happening there. We had to choose songs that were ‘best of’ but also songs that were practical to play live.

How much work did you do after the filming? Did you correct things?
Yes, we corrected some things but to be honest I was expecting more to get corrected - we did the basics and even less than that. We did not change lots of things because we wanted to keep it original. Our session guitarist Dinos [aka Psychon] worked a lot as the sound producer for the DVD and so did Giannis Simvonis who took care of the editing and the artistic side. Both of them worked really hard and the result is awesome.

And Spiros did the cover artwork, right?
Of course, it goes without saying.

Have you had planned something special for the promotion of ”Infernus Sinfonica MMXIX” before the pandemic?
No, we hadn’t. In fact, right now we are working on the new SEPTICFLESH album and we are close to finish it. Sure, the release of the DVD was supposed to happen earlier but other than that, pushing the release date 2 - 3 months later, nothing else happened. Really, the pandemic did not affect the band because we were working on the new album. Of course, we worry how things will evolve with this terrible situation but hopefully in 2021, during spring or summer, everyone will get back to some kind of normality. At least as far as playing live and touring.

Where are you basing this prediction?
Well, this cannot go on forever and I believe that everyone will be better prepared for next summer. Every summer festival for this year has been cancelled and this cannot also happen next year. The world cannot exist without music. I mean, people need to go back to how things were before all this. And I am saying this knowing that this is a serious situation and it is not some conspiracy theory that some foolishly believe. There is no health system that can support a high number of cases, let alone all those who need hospitalization of other emergencies and health issues. People need to be serious about this and always have in mind that pandemics may happen. To me, this feels like a warning for everyone who is treating the planet like this. I mean, during the quarantine our planer started healing.

That’s true. For example, all the countries have experienced lower air pollution. Let’s hope that humanity will be better after going through this, although I wouldn’t hold my breath. Anyways, before letting you go, you mentioned the new album and that you are close to finish this; what exactly do you mean?
We are now writing the vocals and in July we will enter the studio. I will go to Prague at the end of July / early August and the plan is to start mixing in September.

Awesome! Will the album be released in 2021?
Yes, that is the plan. As far as our planning goes, nothing has changed because of the pandemic. We are lucky to be able to follow our timetable.

How many songs are we talking about?
Well, I cannot tell you that. What I can tell you is that the album will be a surprise. I can also tell you that this album was a very difficult one to make because, you know, we had set the bar higher with ”Codex Omega” and this is why it took us four years to be released. Usually, SEPTICLFLESH release one album per three years, but not this time. We only release new music whenever we feel we have something special to give.

Speaking as a fan, I prefer getting an album whenever the band feel likes it as compared to getting albums like they come from a factory.
I believe putting one album per two years is too much. Although, I do understand that things have changed and nowadays after 6 months an album becomes old news. Still, bands need to be careful because the scene has been saturated.

I agree. Any news from CHAOSTAR?
I am working to release the first CHAOSTAR album [”Chaostar”] on vinyl. I have made some changes to the songs and there will be a bonus track. This will be released in September, if everything goes according to plan.

Well, these were my questions, Christos. Thank you for your time and I will let you have a 5min break before your next interview.
Thank you very much, Dimitris, and again my apologies for the delay.

No worries. I hope to see SEPTICFLESH again live here in Chicago soon.
Absolutely! Thank you again and stay safe and healthy.