MAGNUM have become a constant when it comes to great Hard Rock music with albums that really stand the test of time. We are talking about genuine music making that comes from the heart and speaks to the heart. METAL KAOZ had the honor to have Mr. Bob Catley on the phone to talk about the new MAGNUM album and learn firsthand that aside from an amazing singer, he is also great to talk to. Ladies and gentlemen, Mr. Catley... 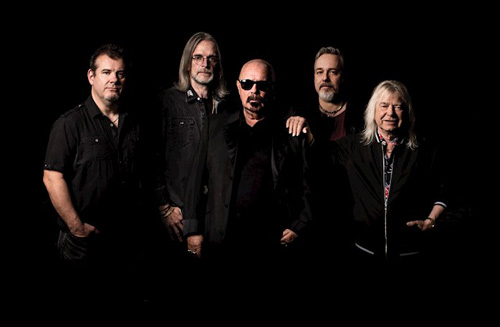 Hello Mr. Catley and welcome back to METAL KAOZ! Can I call you Bob?
You can call me anything you like; Bob would do fine.

Ok Bob, how are things in England?
I’m good, I am in Tamworth in England, the weather is terrible but I’m in good spirits and I’m doing interviews promoting the new album. I’m happy to speak with people who wanna talk about it.

Absolutely. So, first of all, how was the experience with AVANTASIA? It was a great show here in Chicago.
It was great, particularly in LA and Chicago and a little place called Woodstock outside Boston. Really good attendances, I mean, AVANTASIA had not toured properly there aside from some shows three years ago. So, this is getting bigger for AVANTASIA and they’re getting more gigs there. We had great crowds, everybody loved it and we’d do it again in America, very nice people there. I hope we’d do it again some time but we should see about that.

Not only that; I was expecting you to say “well, we’re going to do the same thing with MAGNUM”.
Yeah, I wish we could. The last show we did in America was in 1982 (laughs). We’d love to. I think we need promoters to look on MAGNUM more favorably than they have in the past. We’d love to tour America, come over there and play. But it has deluded us so far. But the longer we keep going, the more chance of people in America getting to know MAGNUM and the music and the promoters included. And maybe one day in the future will get the call to come over and we’d love to do it, of course. But that’s for the future. At the moment, we stick to Europe because there we can tour without breaking the bank. We would be financially ruined if we’d come to America (laughs).

Unfortunately, that’s true. And it’s a shame because you have another great album coming out, “The Serpent Rings”. So, how long did you work on “The Serpent Rings”?
Tony started working on the new songs pretty much after we got back from touring the last record in 2018. So, for Tony it took a year and a half, I’d say. 18 months to work on the album from demoing to actually putting it out in the stores, if you can find a store that’s open these days (laughs) but that’s another story. You cannot do it any quicker than that, really. Although, you cannot take any longer than that, because people are gonna forget about you (laughs). We’d like to put an album out every couple of years, you know, every other year; one recording year and one touring year and that’s normally how things work. And I have AVANTASIA on occasion when I’m allowed, without ruining MAGNUM’s career – not to be around for everything that we do, of course. But now and again I get a call from Tobias asking if it’s ok to go touring with AVANTASIA, and Tony goes “off you go! I’ll finish the record and you could go off touring” (laughs). Which I do, I have a great time (laughs). So, it’s fantastic, I’m very lucky to have MAGNUM all these years and now I have something called AVANTASIA to go on lots of touring with AVANTASIA, festivals, all that stuff. And everybody loves it and those two have to work together, they have to, you know. I must sit for MAGNUM first and then think about AVANTASIA. I wouldn’t want do it anything else.

And we’re really happy to have you in both bands – I mean, we love your vocals.
Thank you. I think people are ok with me being in both bands. AVANTASIA helps MAGNUM and I think MAGNUM helps AVANTASIA, so I think it’s synonymous these two working together, you know. And I’m very lucky to have all that music inside me and looking forward to doing it all again.

And also, MAGNUM added Dennis Ward in the lineup, who aside from a bass player, and a song-writer, is also a producer; so, what of all these did Dennis bring into the band?
Well, Al Barrow had a problem with the touring commitment with MAGNUM, and also moving to the States to live there, and his personal life was suffering; he was away too long from his wife. So, it wasn’t working out for him, so we were searching around for a new bass player and Tobias Sammet said “why don’t you ask Dennis Ward to join your band?” and we’re like “ok, let’s do that”, so we rang him up and he said “yeah, I’ll be very interested”, but being a busy chap, he said “there’s nothing I can’t drop for MAGNUM, I’d love to work with the band”. So, he’s been in UNISONIC, he’s been in PINK CREAM 69 so he’s quite well there and he was mad for it. So we got him on the album, did his bass parts and singing his backing vocals – his voice is just like mine, very strong and with a quite vocal range which you need to back up the delayed vocals like the one Al Barrow had – and he’s a producer himself but he won’t get in the way of sound production – Tony is the record producer and Dennis knows that. We just want him to play bass and leave the production to Tony (laughs) but I’m looking forward to working with him in a live situation.

Absolutely, Dennis is great live. So, the press release quotes Tony saying that the band wanted to explore a more Rock-oriented direction; how is this reflected in the songs of the new record?
There’s his rocking guitar in there, a bit Prog-gy parts but it’s just a Rock album. I know what he means, yeah. There’s a ballad on there but apart from that it’s quite an up-tempo Rock album and it’s quite basic in parts, and in other parts, there’s a multi-instrumentalist part and lots of harmony vocals. So, you have them both, you know. It can be just the guitars, drums, bass rocking out and me doing the singing and no keyboard, and in another song there’ll be lots of keyboards which is quite different throughout the album. It hasn’t the same sound on every track – sometimes the vocals are down, sometimes they’re really up gritty and dirty, and the guitar solos are wonderful and like ZZ TOP gritty, just wonderful. Like in “You Can’t Run Faster Than Bullets”, what a great title, the guitars are awesome. Oh I said, “awesome” and I am English... Oh dear, I am turning into an American (laughs). He’s got quite a collection of guitars now that he uses on the albums and onstage. And he’s a wonderful songwriter, guitar player and record producer. He’s great and I can’t believe I’ve been working with him all these years - I just noticed how good he is (laughs)! It’s wonderful to be in MAGNUM at the moment. I say this every time but it’s actually true; I can’t think of any better to be than MAGNUM.

What did you do in the album singing-wise that maybe an average listener cannot understand? How are you trying to push your vocals or try different things?
I’ve sung like I always sing but I think I’m open to try a bit more of different styles. On this album, I’ve tried a couple of different styles which I haven’t done before as people will hear. Whatever suits the song, you know, but I try not to sing every song the same because it can get a bit monotonous. I think I’ve got a selection of voices within my throat which has been good to me over the years. Some of the songs sound a bit different, although they all fit together perfectly. And my voice is the same as back, you know. I can be quite sweet and lovely in one song and then I’m like “arghhh” [screaming], really gritty in another one. And people say “oh, that’s not you!” but it is because a proper singer should be able to do that. I mean, Jorn Lande from AVANTASIA is a great singer and he can turn his voice into anything – he can do WHITESNAKE, he can do anything. Whatever you want him to sound like, he can be, like a human jukebox! And it’s a great thing he can do that! So, that’s what I’m trying to do; I try to sing in this way until Tony can be happy with that. So I can be rough and ready as well as been old fashioned and melodic and sweet. You need to be, you know; you’ve got to have the range to do and the know-hows and do it. It almost took me my whole life to be able to sing like this and not just be an ordinary singer – you’ve to be something special and that’s what I’m trying to achieve because back in my era there was Freddie Mercury and Lou Gramm, I wanted to be like them. All great singers with lovely voices and that’s what I’m trying to be all these years. And I’m still trying to be like this (laughs).

Well, you belong to the singers that we like to say they age like good old wine, so this is how I understand your vocals; you become better and better with every album, man.
Oh, thank you. That’s nice to hear, it means a lot to me, thank you. It will keep me goin’ (laughs). It is always nice to hear this.

I don’t wanna keep you any longer, Bob. I hope we’ll see MAGNUM at some point here in the States.
That would be ideal, fantastic! We’re working on it but I can’t promise anything. It’s a lot of things that need to be done for it.

Thank you, Bob, it was a pleasure talking to you!
Thank you, my friend. Thank you, everybody! I hope you’ll like the album! And thank you, Dimitris, for the interview – it was really nice!