It's not a big secret that METAL KAOZ has a sweet tooth for Metal bands that like to incorporate "strange" influences and "unusual" elements in their music, creating such a unique sound that will make even the hardest metalhead's heart melt... A living proof that Metal knows no boundaries, races, skin colors or whatever ridiculous discrimination people like to use, Botswana, South Africa's SKINFLINT instantly piqued our interest with their unique blend of Metal. Check out below what the band's guitarist / vocalist Giuseppe Sbrana had to reveal about the band's formation, ID and immediate plans. And yes, keep the fire burning no matter what your passport says! 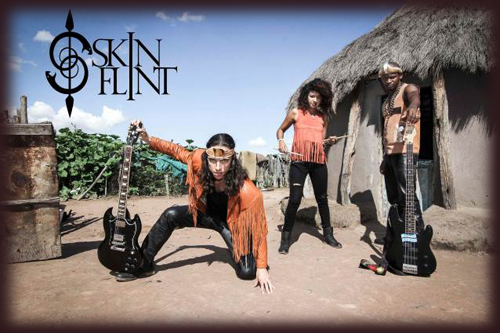 Hello Giuseppe and welcome to METAL KAOZ! This is the first time we have the pleasure interviewing a band from Botswana. Before going through the questions, can you please give us a brief introduction of SKINFLINT?
Hi Dimitris, SKINFLINT is a three piece Heavy Metal band founded in 2006 in Botswana, Africa. The idea was to combine elements from African culture with Heavy Metal music.

Why did you choose to name the band SKINFLINT?
Honestly, there was never an intended meaning behind the name. It just sounded right and we went with it.

How challenging is to be a Metal band in Botswana? I am sure you know that this is not a well-known country as far as Metal is concerned.
Being a Metal band in Botswana is quite challenging. Most DJs and media are ignorant of the Metal scene here. The conditions you have to play in are difficult and  there is a lack of venues and promoters willing to work with Heavy Metal acts. Distances are far apart and travel expenses are high for a band touring in Africa.

Is there an active Metal scene in your country? Do you get chances to play live?
Despite the challenges, we still manage to set up our own shows and are proud of our scene here. Botswana has come to have a strong and vibrant underground Metal scene that is unique in its expression.

In the press release, SKINFLINT is listed as unsigned band; are you actively searching for a label? With that being said, “Skinflint” is released via INTO Records and distributed by Cargo Records; are these distributions deals or a longtime record deal?
Right now, we are not searching for another label. They are our distribution labels and we feel that they have done a great job with SKINFLINT.

Usually when a band releases a self-titled album is in some way to re-introduce the band in the scene; why did you choose to name the album “Skinflint”?
After many years of playing music, you start to discover elements that make your sound unique and I think in this album you can hear a band who is not afraid to push those elements to the forefront. I feel it has a very distinctive tone which is unmistakably 'SKINFLINT' and best showcases our vision for African Metal.

The press release mentions that you wrote the majority of the album in one week; did you write the songs as a band, or did you use material that each of the band members had written separately?
We had no material when we got together to make this album. We jammed as a band live in the studio allowing the songs to happen naturally. I think this gives the songs a feeling of spontaneity.

Who did the production and the mixing of the album? What sound were you aiming for? By the way, I totally appreciate the natural sound and the fact it is not overproduced.
Thank you! Ivo Sbrana produced and mixed the album in a way that stays as honest and truthful to the original source of the recordings. We wanted to capture the raw essence and energy of the band playing live in the studio. We never used any studio tricks and strived for honesty over perfection.

I was very much intrigued by the fact that you are using elements from the African culture; can you please elaborate more on this? Have you ever considered using a language that is also spoken in Botswana aside from English? There are some languages that work great with some Metal genres.
Storytelling, myths and oral tradition is a strong aspect of African culture and I wanted to incorporate these tales into the bands lyrics. Musically, we are also inspired by elements from African culture and use rhythms from traditional music such as Borankana and also other dance styles in Kwasa Kwasa. As for the language, the songs are mostly in English. But there is a possibility of writing songs in other languages in the future.

Speaking of African elements, “Mathoa” sounds awesome; first of all, what does this word stand for? Musically, SKINFLINT touch upon BLACK SABBATH with absolutely killer guitar leads. What are the elements of this song from your perspective?
“Mathoa” is a traditional ankle shaker that is worn by Borankana dancers as an instrument while stomping their feet to the rhythms. You can hear them come in after the opening riff, we were actually wearing the mathoa during the recording of that song stomping our feet as we play. We have quite recently started using them at our live shows too. Glad to hear you like the leads! BLACK SABBATH is an inspiration to me, as well as Jimi Hendrix and other classical blues artists.

You have released the video for “Birds And Milk Bloody Milk”; first of all, what are the lyrics about? Kwasa Kwasa is a traditional dance, right? How did the dancers react to the Metal music? How easy was to shoot this video?
The song is based on a tale of a bird who tells a farmer to kill his only milk cow, and in turn the bird promises him 100 more cows. The man desperate to support his family complies, but the singing bird flies away and does not return to keep his end of the agreement. Kwasa Kwasa is a style of dance music that originated from DRC. It was a first for the dancers, and they were excited to do something different. Shooting the video was challenging but fun at the same time.

How can one get your album? What formats do you have available?
The album can be purchased directly from the band at www.SkinflintMetal.com or other major media outlet such as Amazon. We have it on MP3 and CD format.

What are the touring opportunities for SKINFLINT?
We are currently working hard on a possible US tour in the near future.

SKINFLINT has been around since 2006; how do you think the band has progressed since its formation?
I think over the years the band started taking more risks in exploring new possibilities and directions for African Metal.

Thank you again, Giuseppe, for taking the time to answer to METAL KAOZ questions! Feel free to add whatever you think I’ve missed.
I would like to thank all the readers and those who have supported us over the years. Keep the fire burning \m/