GRAVE DIGGER have released another fine example of the good old Teutonic Metal of the German origin, and for this occasion, METAL KAOZ got in touch with the band’s main man, Chris Boltendahl to learn about the making of “Healed By Metal” and how the Ten Commandments of Metal are shaping up. Check how the ten rules apply to your Metal life below. 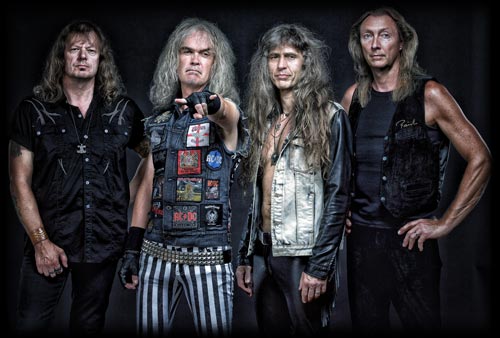 Hello Chris and welcome back to METAL KAOZ!
Thank you my friend, so let’s go.

Alright. I am going to start with a cliché question; how can be one healed by Metal?
Everybody can be healed by Metal, like I was; when I was a boy around twelve years old, I started listening to Metal and since then, Metal has been on my side and has been there through good and bad times. I was healed by Metal when I was in desperate situations and I think this applies to everyone. It is really cool being healed by Metal, I think.

Actually I think the beauty of Heavy Metal is that it can go with whatever feelings or mood you are in. This music is capable of reflecting all the type of emotions a person can have.
For sure, Heavy Metal is the best medicine.

When did you come up with the album’s title? Before or after the songwriting?
“Healed By Metal” was the birth of the record and this a funny story; two years ago, we were playing at a big festival in the Gorgy park in Moscow and beside this famous park there is a hospital. During the festival, a lot of bands played and at the end of the day I was standing there with my friend Richard Peach, who is also our tour manager, and I asked him: “Hey Richard, what do you think? All those people must be dead after listening to Metal for 10 hours” and he said “You know Chris, I see this the other way around; all these people have been healed by Metal”. So, this was the funny story (laughs) and since then, I had this line in my mind [sings the main melody] “Healed By Metal” and we followed it and started composing all these songs in April 2016 and now the album sits on your table.

Not literally, because the album came to me in digital form…
I guess it will come to you soon... (laughs)

You made a video for the album’s title track…
Yes, we did. We wanted to make a classic video, like it was done in the '80s, with a girl, Mr. Death and have a cool atmosphere. The director came up with this idea and we said that we wanted also something to be connected with the album’s artwork, so I think the results is very '80s.

There is a song in the album that talks about the Ten Commandments of Metal, so my questions is what are those?
Are you ready?

Ok, I can feel good about this because I have at least 8 out of 10 (since I am not a guitarist nor a drummer). So, I think I will go to Metal Heaven… (laughs)
Of course you will. These commandments are in the booklet of the physical edition of the album, so you can read them in case you forget. It is cool to have them, although I think there might be more, so I guess we can add more on our next album.

I think we should come up with the 666 Commandments… (laughs)
Oh yeah, you may be right, my friend... (laughs)

There are two bonus tracks in the special edition of the album, so did you write those specifically to be bonus tracks or they did not fit into the album?
It is the latter; I mean, “Bucket List” is a MOTÖRHEAD or maybe an AC/DC type of song, so it didn’t quite fit with the others. I also believe that the ten songs sound like a unit, you know, and I didn’t to disturb this by adding more, so we chose to release them as bonus tracks.

Do you have more songs on the side which you have not included in this album?
We mix all the songs we have written and then, after listening careful to them, I decide what will go where.

So, whatever you have written is being released one way or another.
Exactly. We wrote 13 songs and apart from the 10, plus the two bonus ones, there is one out as a 7” single which is a totally different song. We never write a song that we think it will be shitty, you know? We are very careful and after all these years I can feel and tell if there is a good riff or not.

And speaking about all those years, last year your released “Exhumation – The Early Years” where you re-recorded GRAVE DIGGER classics; how much did the re-recording process affect the songwriting of the new album?
Of course it did affect us working on the '80s material and re-recording all these songs. I think we kept part of that atmosphere in the new album. But this was not something we had in mind before starting the songwriting for the new album. It came naturally and is not something that you can notice that you are doing. In this album, we did something that we have done where we were recording “Tunes Of War” back in 1996. We wrote all the songs together in the rehearsal room and this is why it came out like a unit. This is something really special.

That’s true…
Yeah, I mean I want to follow my roots and I have already in my mind how I want the band to sound, and we follow this. I think this is the magic thing with the band and how we manage to keep the level so high after all these years.

If I am not mistaken, you have said in the past about you being tired of writing concept albums; do you still feel like that?
Never say never, but at the moment I don’t like the idea of working on a concept album. However, I have no idea what will happen in the next album, but I have so much fun writing this kind of Metal like in “Return Of The Reaper” or “Healed By Metal” and get to play all these clichés. If I follow a complete concept, then I have to change again and I don’t think this is something I want to do in the future. You should be expecting something more or less like “Return Of The Reaper” or “Healed By Metal”.

Speaking of clichés, do you think that nowadays people can accept a band using all these? I am sure, you know that there are people out there who say “GRAVE DIGGER are playing the same stuff all the time” and stuff like that.
To me, this sounds good because it means we have our style. When people are saying that we have been playing the same songs for the last 30 years, is a great compliment for me. Because if one listens to one song and recognize it is GRAVE DIGGER, then I say that we have accomplished something and have created a trademark sound.

Yeah, trademark is the right word for GRAVE DIGGER and I have to ask you something that has been in mind for many years and this is like a semi-joke, ok? So, before getting to sing, do you drink tea with stainless steel nails in it to get your voice warmed up? (laughs)
I think my brother Udo is doing this, but I have not done it (laughs). I have no idea how this works; I mean the way my voice comes out comes total naturally to me.

Yeah, this was a joke that we used to say when we were kids and listening to GRAVE DIGGER. It still works I think.
Yeah, I see what you’re saying.

So, what are your touring plans? You have announced some dates in Europe and of course you have the ‘70000 Tons Of Metal’, but what are your rest of the plans for 2017?
In March/April, we will go to South America for a couple of shows and at the end of May, we start with a lot of festivals. And we will see what will come around. For the previous album we did, “Return Of The Reaper”, a lot of people from the US were asking: “why don’t you come to America” and stuff like that and my response was: “we need a proper offer”. One month later, BLIND GUARDIAN came and asked us if we would like to tour the US, and of course we said yes. We did 45 shows in the US, so never say never.

Well, I hope to see GRAVE DIGGER again live in Chicago.
Yeah, me too, but I don’t think this will happen in 2017, so perhaps it will happen in 2018. After all, we did a lot of shows there, so we need a break to make things interesting again.

I see what you’re saying Chris; so, have you chosen the tracks from the new album that you’ll play in the upcoming shows?
Yes, we recently had this discussion and I think we will do “Healed By Metal”, “Law Breaker”, “Free Forever”, “Call For War” and “Hallelujah”.

That sounds nice! Thank you again for your time. I wish you the best and keep doing what you’re doing and we will be here to support you.
Thank you very much! Have a great day, Dimitris.