SATAN'S HOST seem to be on a winning streak releasing an even better album than "By The Hands Of The Devil" that saw Harry Conklin returning behind the mic. METAL KAOZ took the opportunity and submitted a series of questions to Harry Conklin (a.k.a. Leviathan Thirisen) and Anthony Lopez (a.k.a. Evil Little Hobbit ) who answered them as follows. Join the Legions! 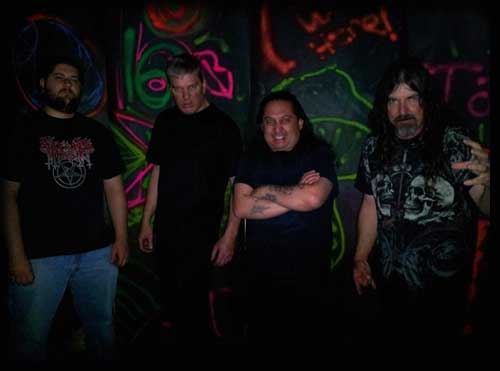 Welcome to METAL KAOZ guys and many congrats for “Virgin Sails”! The album has been out for more than three months, so how is the feedback so far?
Harry: The release is doing VERY well, thank you. We are very pleased with the current success of “Virgin Sails”.
Anthony: Thank you! The feedback has been phenomenal. Even with the major Metal magazines ignoring us, all the True Metal fans and independent Metal magazines and webzines have given us great reviews and have stood “Virgin Sails” up to likes of the greats like BLACK SABBATH’s “13” and CARCASS’ “Surgical Steel” of 2013 releases. With the independent support I don’t think the masses would hear much about us; the major Metal media has chosen to ignore SATAN’S HOST - I guess we are not heavy enough for them, I don’t know (laughs). I don’t see too many bands in the industry doing what we are doing, hopefully they will all catch up soon.

You have released a video for “Dichotomy” that is a collection of photos; how didn’t you use live footage?
Anthony: We did not have any proper taping of any of past shows in 2013. We have plans for a live DVD in the near future, so we’ll have some proper ‘Live’ material soon for the Legions.

Why did you choose this song? Are there plans to film another one?
Anthony: “Dichotomy” was chosen because the vast styles in it; something very new for us and we felt like putting it in the limelight at this time. Right now there are no plans for another video off “Virgin Sails”.
Harry: The “Dichotomy” video was put together for us by a fan. This is the greatest compliment we could ever get.

Harry Conklin returned to SATAN’S HOST in 2010, so are there any differences in the way you worked in the studio as compared to the past?
Anthony: No, we have been working with Dave Otero at Flatline Audio since “Burning The Born Again” and we have a great working relationship him as far as producing and recording. The only difference was instead of Eli tracking vocals, it was Harry. Patrick and Harry had a special chemistry since back in the day when they created “Metal From Hell” and “Midnight Wind”, they just basically picked up where they left off so many years ago, and writing for us is very enjoyable and productive all the time.

How long did it take you to write and compose the music in “Virgin Sails”?
Anthony: About a month or two, not long. We create very easily and efficiently; Patrick is constantly writing riffs and song structures and usually has a million ideas when we get together to build the album. We basically hash out the arrangements and then collectivity write lyrics.
Harry: Not very long. All together from writing and final recording was about 4 months. The hold-up was due to the label not having the funds to complete the recording project.

Is there a concept behind the album’s lyrics? Particularly I am asking about “The Island Of the Giant Ants” and “Virgin Sails”.
Harry: Not directly. We have a responsibility to the world to spread the TRUTH about religion, govement and media propaganda's manipulation of the populous. We hope this will enlighten the populous out of there slumber and into the light of TRUTH.
Anthony: There is always some kind of concept; this time not lyrically but mostly with the flow of the album musically. It was very important that the album was laid out the way it is. Initially “Virgin Sails” was going to be first and “Cor Malificus” last, but it didn’t fit; once they were switched, it fell together perfectly.

All the songs you wrote for “Virgin Sails” were included in the album or do you have some songs that for some reason did not make it?
Anthony: We never write fillers, so all the songs we wrote for “Virgin Sails” made the album. Right now, we are about done writing for the next album. Every song has its own life, writing fillers is the lazy musician cheating his listeners. Why would you want to write something that isn’t special and has its own life? I’ve never understood that concept.
Harry: We always have material in the vault for future release. We are a band in constant creative mode. We are writing songs for the next project now.

“Virgin Sails” has an amazing cover artwork, so what was the band’s involvement in the artwork’s making? Is there any connection with the self-titled song?
Anthony: Patrick kinda had a vision and just told Joe Petagno what he felt and then we just let Petagno run with it; he always amazes us with the final product, brilliant artist.

For the time being you have announce two live shows in Greece’s ‘Up The Hammers’ and in the US’ ‘Doom In June’ fest; are there any other live dates to be added in your schedule? What about a full US tour?
Anthony: I’ve only heard of one appearance for the ‘Up The Hammers’ fest in Greece. I have not heard of any other shows being confirmed. We are working on some more summer dates in the US.
Harry: We are planning a US tour now, including the east coast and mid west.

Great! How many songs will you rehearse for these live dates? Do you have any surprises?
Anthony: We basically can do anything off the last three albums, plus we know lots of material from all prior recordings to that - we have a very large pool of songs that we can pull from. The hardest part is agreeing what to put in the set. Every show we do is different; we go show by show and add in the setlist whatever we feel it's good for the evening.
Harry: We are planning that right now.

How many songs will you use from “Virgin Sails”? Having 8 full length albums must be hard to choose the songs to use in live setlists, right?
Anthony: It’s hard to say; we won’t know till a few hours before the show.
Harry: Our live shows are lengthy. We have many great songs to play. We anticipate 1 to 2 hour sets.

Do you have other live dates in Europe lined up?
Anthony: Not at this time.

Will you use the same setlist in ‘Doom In June’?
Harry: We never play the same list twice. The same songs may be included in this list but we change sets quite frequently.

Looking at the band’s backcatalogue I see “Assault Of Evil… 666” as the only DVD release that is actually a collection of videos; is making a new live recorded DVD in your plans?
Anthony: Yes, there are plans for a live album/DVD in the future.

SATAN’S HOST was formed in the mid-80s, so how things in the Metal scene have changed over the years? Is it nowadays more difficult for a band to economically survive than it was in the beginning?
Anthony: Most definitely; it is hard for the true talented bands because the industry is saturated with so many bands that all sound the same. With the advent of home recording technologies, most consumers really don’t know what a quality recording is, or is able to establish what the level of talent of the artist is anymore with editing, etc. It is very disappointing to go see an artist live and them not being able to even come remotely close at performing what was captured on the recordings. For us, it is very important that we are able to replicate what we record - you have to keep it as real as possible.

SATAN’S HOST seem to be releasing one full length per two years; does this mean that we should expect the next one somewhere in 2015? I mean, have you set a timetable for the next SATAN’S HOST album or you just take things as they come?
Anthony: Our goal is to put an album out every year; “Virgin Sails” was suppose to have come out in 2012 but was pushed back and the situation was totally out of our hands. We are working hard to get the next album out in the late summer / early fall of 2014.
Harry: We like to put out a new release every year but the last release was held back thus we are putting in the extra effort to get this new material out in a more timely fashion.

There are two albums from SATAN’S HOST that were not released: “Midnight Wind” and “Legions Of The Fire Age”; first of all, can you shed some light on the reasons why this happened?
Anthony: I’ve heard little about “Legions Of The Fire Age”, that was before my time in the band and I really don’t know what the history is on that. I don’t even have a copy of that or have seen it. I think with “Midnight Wind” everyone in the band abandoned Pat and Harry on the project; only tracking and some mixing was done, and somehow after that it began a bootleg lifestyle.

In “By The Hands Of The Devil” you had complete makeover of THE BEATLES “Norwegian Wood” that we had the chance to listen live at ‘Keep It True’ Festival; who had the idea to cover this one? Are there more cover songs recorded that have not been yet released?
Anthony:  I’m sure something may transpire in the future, as far as “Norwegian Wood”, Patrick was always fiddling with the riffs of that song in rehearsals and before we knew it ,we had refined it and made it into a song, spontaneously. It’s just one of those things that happens; it was never planned out, it just happened - we were having fun and it worked out for us.
Harry: Time will tell. There are a great many secrets in the SH bag of tricks.

Well, thank you guys for taking the time to answer to METAL KAOZ questions and I hope to see you soon live in Chicago!
Anthony: Thanks for having us! METAL KAOZ has always been a great supporter of SATAN’S HOST and we are very appreciative of your efforts to spread the work and word of SATAN’S HOST!!! Hail Legions WORLDWIDE!!!