After the tour with DANZIG, A PALE HORSE NAMED DEATH booked some headlining shows in the US and Chicago was included. So, having very recent the great impression we got from the opening show in Atlanta, there was no chance to miss a headlining APHND set, even though it was hosted by a non-that-great venue/bar. Before the show, we met with Sal Abruscato and had a nice chat while battling the noise coming from the bar. 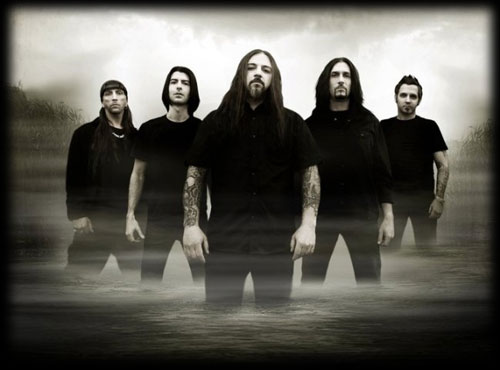 Hello Sal, how was the US tour?
The tour has been great and the shows with DANZIG were incredible.

So, there was no drama during the DANZIG tour with all those restrictions and stuff?
There was absolutely no drama. We were professionals, the band’s crew and management treated us great and Danzig liked us, so we have nothing to complain about.

To tell you the truth, Sal it felt a little bit strange seeing A PALE HORSE NAMED DEATH as the opening band for this tour…
Yeah, in fact there were a few people saying the same thing but it is what it is. They had BUTCHER BABIES higher in the bill but such things happen, you know?

Yeah, so how did the DANZIG fans treat you?
It seems that a lot of them liked us because after your set they came to the merch table to check us out, chat with us and buy the records.

During the set in Atlanta you said that iTunes is killing your business...
Yes, it is because nowadays no one wants to get out and buy the actual records. They are just downloading tracks and that’s all.

Do you think that is there any way that people will buy the actual album and not download it?
I don’t know; I think people like the convenience of being able to just buy one song from one band and one song from another. They don’t want to get the entire thing for some reason.

One more thing that caught my attention is that you almost quit playing music but the fans kept you going.
Yeah, I always have this in mind because it is so hard keep everything going like many other things in life. At the same time the fans push me to go on because I find it amazing having people supporting an idea that started some years ago. Back then I wasn’t sure if I was going to do this, but now we already have our second LP out.

By the way, how does it feel seeing from the stage all those TYPE O NEGATIVE banners or t-shirts?
It feels very nice seeing that the music we wrote has an impact and people still remember it.

What about the third A PALE HORSE NAMED DEATH album; do you have any thoughts or any ideas?
We have been thinking about it and working on some ideas, but nothing solid at this moment. Because we have been so busy on this tour that there is no time at all to gather your thoughts and stay focused. I mean, my mind is there but I haven’t really worked on the ideas.

Is there a concept or even a working title you have in mind for this one?
I have some titles in mind but I am not going to reveal them because it’s nothing final. But the album title is the starting point to make an album...

Does this mean that the artwork comes also early in the game?
No, but there is a specific idea that I want to have on the cover artwork. Just like we did in “Lay My Soul To Waste”. I told Sam [Shearon], the artist of the artwork, that I wanted to have something like a funeral and he came up with this image-within-an-image with the horse skull, so it became a some short of a sequel to the first album. So, now the third album has to be something equally cool and have a connection with the previous.

Apparently the horse has become the band’s mascot now…
Yeah, I guess. After all, it fits perfectly with the band’s name and since no one is using this – everyone is using human skulls, you know – so, it works (laughs).

What about the record label, I mean will the new album be on SPV also?
Most likely, I mean I am very happy with them and I don’t know if I want to another label. You know, sometimes the grass looks greener on the other side of the fence and when you go to another label, they treat you like shit. SPV have been really good with us and actually they paid us to go on tour because we didn’t get much money from DANZIG so we got from them all the support we wanted.

That’s great. You mentioned the European tour; so have you decided the supporting bands?
I believe it will be BLOOD RUNS DEEP from Switzerland and that’s all. I don’t know if there will be local bands on the billing, like they do here in the US, ‘cause I think they don’t do that in Europe.

Well Sal, there were my questions in this noisy environment, so if you have anything to add now is the time.
I’d like to thank you for all the wonderful support from you guys; you have been very good to us – you came to Atlanta, you are here in Chicago and also reviewed the new album. And I’d like to thank the fans for their support and the help for getting the word about the band’s name out.

A Pale Horse Named Death - When The World Becomes Undone