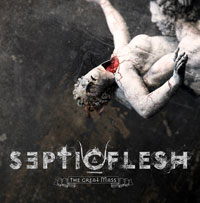 For reasons that I really don’t know SEPTIC FLESH and ROTTING CHRIST are the bands that managed to get out of the restricted boundaries of the Greek Metal scene by releasing great albums. Although SEPTICFLESH (this is the new format with the space in between) had gained a significant momentum with the unholy trinity of “Fallen Temple”, “Revolution DNA” and “Sumerian Daemons” got into a hiatus time period. This lasted for almost 6 years after which the Greek blacksters released “Communion” sending the message that SEPTICFLESH are back in business. So, “The Great Mass” is the second release after their return so let’s see whether they will regain the position in the Metal scene.

The album opens with the soprano vocal melodies by Androniki Skoula and the massive sound of the Filmharmonic Orchestra of Prague. The use of a live orchestra should be a ‘must’ for all the symphonic Black Metal albums ‘cause it sounds ‘real’ and not sterile and dry when they are electronically produced. I really liked the fact that “The Vampire From Nazareth” is based on the orchestrations creating a hearty dark atmosphere and is lead to a climax when the distortion, the blasting drums and the growling vocals enter. The melodic break with the clean vocals will bring to mind the recent ROTTING CHRIST works and that should not be negatively received by their old-school fans since I believe those bands share the same aesthetics. Nevertheless, the album progresses like a movie soundtrack creating images of lost and forgotten demons wandering on Lovecraft-ian landscapes and that is the main success of this album. After all, the main characteristic in SEPTICFLESH was the theatrical approach in music composition. Take for example the excellent “Pyramid God” that kicks in with an addictive violin based melody and very good guitar leads in a mid tempo rhythm. I love the use of some well hidden Eastern finishing touches that yet again underlines the theatrical perspective of the band.

Sometimes using orchestral parts might take the edge of Black Metal but SEPTICFLESH managed to keep the heaviness by mixing their music with symphonic parts in a uniform blend that becomes impossible to separate. Just like in “The Undead Keep Dreaming” where the MORBID ANGEL-esque double drum bass exchanges roles with the melodic parts giving the song an additional dimension that definitely needs more time to grow inside. In fact, I found myself noticing the very good guitar work after many listening sessions and once I did the feeling of completion overwhelmed me. This feeling came to life in “Rising” and in “Therianthropy” where the guitars come to the spotlight with solid rhythms and -why not- easy to remember leads. Also I think the use of clean vocals has added a nice Gothic touch and another layer in this multi-level creation by SEPTICFLESH.

There is no doubt from my point of view that this is a great album and not just for the symphonic Black Metal fans. The sound production by Peter Tägtgren is the icing on the cake since it treats this multi-color music with justice and balance. The only second thought I have is how the band will treat all these orchestrations in live performances since using pre-recorded parts will inevitably took away some of the album’s atmosphere.