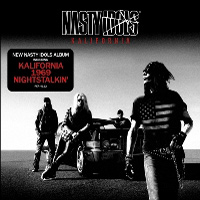 Four outlaws, gimme bass ‘n’ guitar ‘n’ drum kit and a mic and let ‘em do some noiz the way they have done since the late 80s when they formed in Finland. Yes, NASTY IDOLS is not another Perris Records youngsters discovery; they have already released a string of albums that had success in Northern Europe and I can clearly recall “Cruel Intention” being a top-of-the-pops Sleaze Rock/Metal album showcasing a ruthless both flirting with the HANOI ROCKS legacy and the ongoing at the time American ‘dirty’ Rock exposure. Now, is there some kind of manifesto they’d like to share with us circa 2012?

ALICE COOPER, SKID ROW, MÖTLEY CRÜE and (as already said) HANOI ROCKS sum it up to what NASTY IDOLS have to offer. The album has energy, it really does, but I think the vocals sound a little bit worn out at times and that’s a point the music finally tries to even the score without success. Else, “Kalifornia” is a nice album that brings forth a nice vibe by this Finnish boys (?) and if you like to have a nice soundtrack while having beer at a local Rock club then the DJ should obtain a copy of this CD. Yet, if this is your first contact with the boys, I’d request you firstly pay attention to 1991’s “Cruel Intention” (a small diamond, in my humble ‘mascara’ opinion) and then decide if you will proceed to ask for more from NASTY IDOLS.