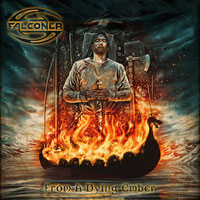 It is disheartening and often infuriating to see a band that you love become a performer of its own music. You see, I believe that once a band stops making music - or even worse, release albums just to get on the road - it becomes a lost cause and eventually falls off my radar. With that being said, I have absolute respect to those musicians who refuse to follow this path and instead call it a day. Reading the announcement that FALCONER would split up after the release of their swansong “From A Dying Ember”, made me feel sad (they have released some awesome albums), but at the same time, immediately earned my respect for not accepting to become imprisoned by their own music style. Although, reading “make this final album as good as we possibly could” did not leave a nice ring on my ears, as it showed that the inspiration-well had dried for quite some time. Could that be the case?

Fortunately, “Kings And Queens” opens the album hitting all the right FALCONER spots, although it is a mid-tempo song. I mean, I would prefer something faster as the first song of the last album, but hey, you cannot always get what you want. The guitar work is amazing though, laying down catchy riffs and melodies that may rightfully so sound a bit moody and sad. After all, this is the last album with a cover artwork that kind of prepares you for a sad twist. As always, Mathias Blad’s vocals are responsible for granting FALCONER the special character and the distinction element from the saturated Folk / Power Metal scene. Oh yeah, his melodic reading creates this sweet antithesis with the overall heaviness that is always present in this band’s music. I mean, “Desert Dreams” is a classic FALCONER track with traditional double bass drumming, galloping rhythm and Mathias’ epic and expressional singing. The album goes on like this without something ‘out of the ordinary’, meaning that the songs do fit the FALCONER style but, to my ears, lack that extra something that would grant them the ‘repeat’ status. In fact, there are parts that I found myself remembering, and not entire songs; for example, the riff-driven bridge on “Redeem And Repent” is amazing, but the rest of the song does not get stuck and the same unfortunately goes for “Fool’s Crusade” with the faster breaks and sing-along chorus. The bagpipe sounds in “Garnets And A Gilded Rose” and Medieval-styled “In Regal Attire” serve the Folk side of FALCONER and especially the latter would easily become a concert favorite with the ‘dance-along’ main melody. The same goes for double-bass driven “Testify” that has this ‘fists in the air’ quality and the appropriate headbanging tempo to fire up the mosh-pit.

“Rapture” sounds to be the last but not least song for the album because it is the richest composition with melodic parts, awesome snare-driven breaks and the type of epic heaviness I always like to hear from this band. I guess, one can easily consider this as the best way to drop the curtain for this band and kind of forget that this turned out to be the weakest album in the FALCONER back-catalogue.

Even though “From A Dying Ember” does sound as FALCONER, it fails to put its foot on the door of the band’s discography with less memorable songs than the previous albums. I guess this lack of oomph is what the lineup realized and took the decision to call it a day. Again, this is fair and – as I said – commendable but it may not be considered as powerful as one would be expecting as the last album. I hope to see some of these musicians involved in other installments.