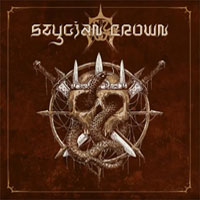 I really like when female-fronted Metal bands go against the ‘beauty-and-the-beast’ grain and the whole growling male vs female ethereal / operatic vocals, and instead go with vein-popping vocals characterized by that harsh Metal-lic hue, following the path carved by singers like HELLION’s Ann Boleyn and of that ilk. Southern California’s Doom metallers STYGIAN CROWN are fortunate to have Melissa Pinion, a powerful and classically trained singer with whom they create a pretty impressive sound that at first may remind of the Doom legends CANDLEMASS. Melissa’s vocals bring so much epicness and dynamics that grant STYGIAN CROWN a quite distinct and recognizable sound.

I was not surprised seeing Italy’s Cruz Del Sur Music adding these guys to the label’s roster and release the STYGIAN CROWN debut, even though this band may seem young, having just one demo under its belt. You see, STYGIAN CROWN is led by former MORGION and current GRAVEHILL drummer Rhett A. Davis, who tapped his GRAVEHILL bandmates Nelson Miranda and Jason Thomas, on guitar and bass respectively, while their second guitarist, Andy Hicks, plays on MORBID ECLIPSE. What I am saying is that STYGIAN CROWN isn’t another Doom Metal band consisting of newbies, but it’s comprised of experienced musicians who possess the know-how of creating an impressive piece of music. However, I am not only crediting Melissa’s powerful presence for this, because every track, from the mini-intro “The Hall Of Two Truths” till the faster “Two Coins For The Ferryman”, is packed with boulder-sized Doomy riffs, heavy-sounding thunderous drumming (ok, we can blame the 26” bass drum for that) and an almost-Eastern-laden, SOLITUDE AETURNUS-like atmosphere that undoubtfully adds to the crushing epicness.

“Through Divine Right”, “Flametongue” and “Trampled Into The Earth” are refined versions of the ones released in the band’s demo debut, and because of this, sound beefy and fresh. The new compositions “Devour The Dead” and my personal favorite “Two Coins For The Ferryman” are lyrically inspired by myths from different cultures – the first one is about the Egyptian goddess Ammit, and the latter about Charon, the boatman who carried the dead across the river Styx (for the right price of course). There could not have been a better theme for the heavy-as-hell guitar work that serves with respect the traditional Doom Metal. Another favorite is “Up From The Depths” which has that SOLITUDE AETURNUS-energy wrapped around it, and I promise, you’ll instantly get hooked just by listening to its opening Eastern-like, catchy riff.

It must have been years since I had crossed paths with such a magnificent debut full-length of epic Doom Metal that has locked my attention for quite a while now. If you give the slightest damn for this genre, “Stygian Crown” is the new lil’ gem that should be added to your vinyl collection to increase the quality of 2020’s epic Doom in your life.