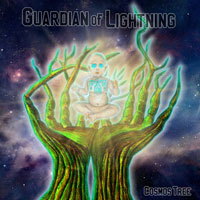 Sometimes I like to challenge my instincts and try to guess a band’s music style from its moniker, logo and maybe from the artwork on its debut release. In the case of GUARDIAN OF LIGHTNING, I can say with confidence that I failed miserably… The band’s name was giving me strong Power Metal vibes and the “Cosmos Tree” hinted Stoner Rock / Psychedelia... ‘Wrong and wrong’ was the verdict, but no matter what, I was interested to check them out. Not only do these Brazilians belong to a different Metal genre but they have created their own. That’s right; these guys play Thunder Metal and the reason for this distinction is that the songs are bass, and not guitar, driven. Now I am sure I got your attention, so let’s see what “Cosmos Tree” brings forth.

Even though I said I was twice wrong in guessing the Metal style, I will cut myself some slack because the album’s title track has something to do with Psychedelia but in a Stoner kind of way. Marco’s vocals sound like he is Lips’ lost Brazilian cousin, sharing the same type of articulation and harshness. This singing fits perfectly to GUARDIAN OF LIGHTNING’s pounding Metal that I think has lots in common with Stoner. Well, for the latter I will credit the bass leads for making the song sound heavier than it would, if the guitars were leading the way (being down-tuned would not help that much). The hi-hat slowly lifts the curtain for the bass riffs to sneak in and before you know it, a massive groove hits you in the bull’s eye. The Brazilians have a deep understanding of melody (this must be imprinted in their DNA) and you can hear this in the smooth / relaxed way the album openers ends. The beauty of having the bass delivering the riffs is highlighted in the faster “Raise Your Sword” that grants a Power Metal character in GUARDIAN OF LIGHTNING’s music. “Sound Of Thunder” starts with piano-sounding keyboards and a mid-tempo rhythm before catching you off guard the moment it gets faster. I got a THOR feeling during the faster epic part where the bass leads lay down some hard-headbanging riffs. As I was starting to feel comfortable with how I would describe GUARDIAN OF LIGHTNING, “Aligned With The Stars” hit me with some Stoner / Blues bass licks… Is there some bass-slide action there? Oh man, I am in no position to tell, but the groove and the melodies are an absolute delight. Speaking of bass licks, “Insider Of Us” could easily be the blueprint of how a Metal band can utilize more the four strings to sound groovier, heavier and other superlatives you may think of. I can only recall BASSINVADERS for attempting to put the bass on the driver’s seat when they released “Hellbassbeater” some 12 years ago, but that’s all.

I have enjoyed “Cosmos Tree” from start to finish and had a blast with the Funky bass action in “Another Place” before the power-ballad-esque “Be Like The Moon” where the acoustic guitar makes more room for the bass to lay down some sweet melodies. The cowbell marks the return of the groove, so whatever ballad was brewing there was put to sleep and made way for the foot-tapping rhythm. I cannot tell whether Thunder Metal will gain traction (after all, this title sends the wrong Power Metal vibes) but what GUARDIAN OF LIGHTNING have put together is 100% entertaining and, on top of this, serves my sweet tooth’s needs for more bass in Metal. They have my vote.