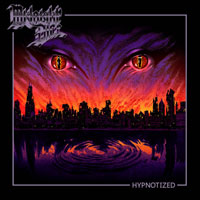 It was quite disappointing seeing SATAN’S HALLOW calling it a day, especially after crossing the Atlantic all the way to Germany’s ‘Keep It True’ festival to deliver their Chicago-born traditional Heavy Metal with impressive energy and confidence. In hindsight and after having watched MIDNIGHT DICE in concert, I’d say their decision to change a bit and move forward was golden. Really, you don’t need me to tell you that, because their new EP, titled “Hypnotized”, is already out there and has been on the repeat – at least until the vinyl version comes out.

This is a four-song EP as “Farewell” is an instrumental that kind of preps your ears for some high energy Heavy Metal with the right mix / production to highlight the band’s strengths that, by the way, are quite a lot. “Starblind” is fast with NWOBHM guitars, awesome bass and stellar vocals feeding from all things traditional. I mean, the MAIDEN and PRIEST references in the bass-driven galloping rhythm and the double-bass drumming, respectively are definitely the first things that come to mind during the first spins. Mandy deserves a special shout-out for... failing to meet all the clichés of a female singer. That’s right; there are no operatic vocals, or any “sweet” singing, but pedal to the Metal vocals with impressive power in a wide octave range. You can hear this on the RAVEN-like “Speed City” where Mandy goes from mid to high pitch without breaking a sweat and, most importantly, without losing power. Check her awesome scream just before the bass-driven part leading to some equally awesome vocal melodies before the MOTÖRHEAD break and the killer solo. Too much? Well no, because the end result is packed with energy that is meant to be enjoyed live (damn, this virus...). The guitar distortion of the EP’s titled track justifies the DOKKEN influences mentioned in the band’s bio, and if you want to get specific, then I would point you towards the “Tooth And Nail” era. Yes, there is some trademark US Heavy Metal here with a foot-tapping rhythm (perfect for a Friday night out) and some fist-pumping double guitar leads to melt your face with. It feels kind of unfair to the rest of the lineup, but really, the vocals in this one are absolutely amazing, especially when they hit those high notes. I have no idea what is going on with the Metal scene but we really need more female voices like this one, and less copied / pasted from the “successful” ones. “Lazer Tears” drops the curtain with a bang after having served six minutes packed with galloping rhythms, chanting-along guitar riffs and basslines that definitely worth your attention, especially during the solo where they come a bit louder in the mix than the rhythm guitars do. There is an almost FIFTH ANGEL taste in the vocals that once again stand in the spotlight, although the guitar leads are giving a good fight for it.

This is an impressive EP from MIDNIGHT DICE who have proven everything my Metal instincts were telling me when I was watching this lineup ripping it from the stage. I hope that they will get the response they deserve and the right motivation to deliver a full-length album. Until then, “Hypnotized” can keep us a great company during these summer nights with the volume all the way to ten.