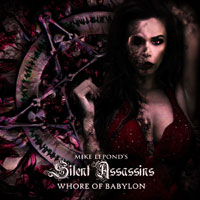 It is clear that things are rolling when a band shortens the time between album releases, without giving up on quality. I mean, whenever a band breaks the “quality over quantity” motto by putting out great music in less time, proves that the musicians have struck gold. MIKE LEPOND’S SILENT ASSASSINS seem to be on this winning streak and are about to hit the ground running with “Whore OF Babylon” that spend half of time the previous record, “Pawn And Prophecy”, did inside Mike LePond’s music-creating and constantly burning stove. Of course, touring always gets in the way of studio time, and this is of high importance in Mike’s case who is involved in a bunch of awesome bands (do check his musical bio to see for yourself).

Having in mind the previous two SILENT ASSASSINS albums, I kind of knew that this would be awesome too. In a bizarre way, this can potentially remove some of the excitement in terms of getting surprised by something you did not see it coming. Still, Mike managed to avoid this, and threw a couple of curveballs towards me, and I was happy to totally miss-catch them by being unprepared. “Dracul Son” is a massive album opener with a killer riff and the trademark bass sound that has strong MANOWAR roots. Alan Tecchio has a powerful set of pipes and is able to keep up with the faster almost Thrash tempo with ease. The rhythm part in between the guitar solos is perfect for moshing, while the Michael Romeo orchestrations add the appropriate dramatics to fit the Vlad The Impaler lyrics. The bass-led and galloping “Ides Of The March” opens the US Power Metal vault, and lets Alan shine with his cleaner vocals; this is definitely a live favorite and I think has some SEVEN WITCHES references. I am happy to hear that Mike let his bass-playing to freely roam during the still-epic “Tell Tale Heart” laying down some sweet riffs that could not have sounded this cool if they were delivered by the thinner six strings of a guitar. You can enjoy the classic BLACK SABBATH ending before getting surprised by the piano-sounding keyboards that add an almost Blues flair.

Oh yeah, the surprises I thought to be missing were coming forth, with the mandolin action sealing the deal in the Irish-flavored “Night Of The Long Knives”. Having read the song-title, I frowned a bit when I started listening as I was trying to understand how the purge that took place in Nazi Germany in 1934 fitted the Irish tunes and the Flamingo clean guitar action… Apparently there is another Night Of The Long Knives that has such origin as Mike explained in the recent interview to METAL KAOZ. “Champion” did not hold back on the surprises, starting off with some flute melodies and female vocals, making me think of BLACKMORE’S NIGHT. Yeah, there is a Medieval feeling here and I have to admit pushing the bass higher in the mix fits the music like renaissance hat on a bard’s head, and wait to hear the bass solo. It is amazing to think ‘I did not see that coming’ as you spin a new album, and still be happy to keep listening. Diversity in music is kind of hard to be found these days as bands try to build a specific fanbase by using all the clichés under the specific genre’s sun. With that in mind, I love that SILENT ASSASSINS are mixing this up and, in fact, love how the poetic aesthetics of “Champion” make way for the straightforward aggression of “Ironborn” with massive rhythm guitars, and I swear I got an OVERKILL taste, but only during the fast parts, because the US Power Metal is shining strong here during the chorus. Speaking of epic, I am sure you’ll love the chanting-along riffs of “Power Of Steel” (you shouldn’t be expecting something less with such title), although I have to admit there is some solid old school Hard Rock foundations here, and I refrain from calling out bands that remind me of, although the guitar solo is soooo tempting…

Taking a moment to read what I have written so far, I realized that I have barely scratched the surface and did not leave much room to comment on the Eastern-sounding “Whore Of Babylon” track with the sitar sound and the yet-again killer bass that gets even better during the medieval galore (get Blackmore on the phone please) of the 8-minute “Avalon”. This is one of the cases that you have to say “they kept the best for last”, although going through the tracklist, you’re gonna find a boatload of things to remember. The bottom line is that MIKE LEPOND’S SILENT ASSASSINS completed a powerful triptych with albums that each one is better than the previous. I hope the third one will be the ‘charm’ and drive the attention and following this band definitely deserves.