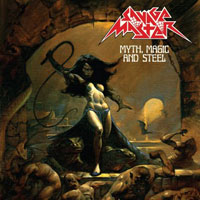 Watching a band developing its style on stage and in the studio is an awesome experience, especially if you like what you hear. SAVAGE MASTER showed their sharp teeth early on, and in October 2019 sealed the deal with “Myth, Magic And Steel” as their third full studio effort. Keep in mind that many consider the third album as an important milestone as it secures a band’s style, and proves (or disproves for that matter) what had followed was not a product of luck or of the initial enthusiasm. SAVAGE MASTER have worked hard onstage and in the studio, and have produced a solid album that has been regularly visiting my turntable.

The album’s title track kicks in on a high gear with killer guitars, a massive bass sound and Stacey’s wailing vocals that have become one of SAVAGE MASTER’s points of reference. But her singing has developed more than what one can hear in the first two albums; there is more depth and more melody in her vocals, and for that reason, Stacey’s performance has become more expressive and less raw. Not that she has gone soft (quite the opposite) but she has found her performing style and has worked hard to improve it in every aspect. You can hear the different vocalisms Stacey has added in her singing during this speed album opener. The galloping “The Devil’s Ecstasy” stays on the same path but leans a bit more on the heavier side, with the drumming having a huge contribution on this. No wonder that SAVAGE MASTER has turned this into a constant in their 2019 shows. On top of this, this song has that US born-and-raised True Metal attitude that gets your fist in the air and invites you to sing along. It is exciting to see US bands keeping the True Metal flame alive, and can potentially draw more attention in this awesome Metal genre. In fact, watching how SAVAGE MASTER gain the audience’s attention at first and then engaging more people into the show is exactly what I am looking for from new bands of this scene. “The Owl” got my attention the first time I heard it in concert, with the mid-tempo and genuine epic character. Because of this, Stacey gets more room to showcase her vastly improved singing and right on time steps backstage, leaving the room for the guitars to take over with NWOBHM double riffs (love how this song ends).

SAVAGE MASTER have managed to combine stories about magical swords, witches and all the things  lurking inside the pages of heroic novels that some of us - still - like to read. I don’t know how but all those elements work extremely well with double guitars, galloping tempos and vocals that have nothing to do with fairies, ‘sweet’ vampires or any other “Twilight” creature... Can you imagine “Flyer In The Night” or “High Priestess” talking about fluffy creatures of the night? Nah, more like polished creatures of the evening... Speaking of galloping tempo, then make sure to crank the volume up during “Crystal Gazer” and the NWOBHM galore (don’t you love when the hi-hat sound like this?) of my favorite “Lady Of Steel”. For this killer tune, SAVAGE MASTER teamed up with LADY BEAST’s Deborah Levine and Sandy Kruger of the SACRED FEW fame and enhanced the song’s in-your-face attitude and Metal-ness. “Warrior vs. Dragon” pushes the SAVAGE MASTER envelope as it clocks 8 minutes (ok, the last three minutes is almost a clean guitar outro but still awesome) that is the longest in time duration in the band’s back-catalogue. The slow first part fits like tailored suit to the still-going epic atmosphere with some nice MANILLA ROAD guitar references before going all fast on you, so you better be ready to headbang. Extra kudos for the ‘natural’ sound and for staying away from all those ‘cookie-cutter’ productions that sound like a computer is responsible for their creation.

As I said, SAVAGE MASTER have improved and have built upon the solid foundations of the first two albums. I am excited to hear that the band will put on the fourth SAVAGE MASTER album, especially now that there is no touring in sight.