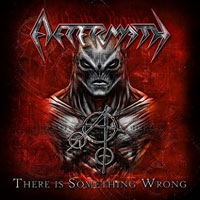 Seeing AFTERMATH for the first time onstage felt like there was a lot to unpack from their music all the way to the performance with both being a strange (at first) mix of Punk, Thrash with almost Progressive finishing touches. Confusing, right? A second gig and after some needed homework, I started understanding what this band was doing, and in the end, I was on the look-out for the new album that would break a 25-year studio silence. In fact, “There Is Something Wrong” is just AFTERMATH’s second full length and the follow-up to 1994’s “Eyes Of Tomorrow”.

Before putting together these words, I decided to break my own protocol and check what has been already written about “There Is Something Wrong” considering how tough can be the introduction to AFTERMATH. And I wasn’t wrong; the opinions are mixed just like this album feels like. There are strong lyrics that may provoke you, and the song-structures do not follow the norms, and so forth... But wait a minute; isn’t this what Metal is best in doing? You are damn right it is and, in fact, Metal is all about going against the tide to disregard whatever society may push as ‘natural’ or ‘as age appropriate’, supporting everyone to carve his or her own path. So yes, “There Is Something Wrong” will get you confused, angry, frustrated, and often you’ll find yourself disagreeing with the lyrics. In my book, this translates into a food-for-thought album that may trigger some well-needed discussions. On another note, this at-times-chaotic structure is the perfect representation of nowadays society that cannot distinguish left from right, even in political terms...

This album starts with “Can You Feel It?” that is basically a collage of scattered music parts, newscast excerpts and several screams that (unfortunately) capture the way people are getting bombarded from all sides with news, announcements and ‘words of wisdom’ from the so-called ‘influencers’ who do not know how to tie their own shoes. Without pausing, “False Flag Flying” grabs you by the throat with some Hardcore aesthetics slowly building the tension with a collection of words that some sound totally relatable. The muted guitar changes profile and steps on the gas pedal entering the Thrash territory with all guns blazing (killer RAGE AGAINST THE MACHINE-e solo by the way). Now, we are rolling, and the fast “Diethanasia” pushes everything to the red zone with fast drumming, Hardcore guitars and vein-popping vocals that sometimes feel someone is screaming at you. The groovy part with the double-bass drumming will get your blood boiling to the point only a mosh-pit can offer some relief. Sure, the movie/radio excerpts can be a bit distracting, but to me they feel so appropriate when considering that modern society was the band’s main inspiration. The crazy Thrash-in’ of “Scientists And Priest” and the anger stemming from the Crossover “Smash Rest Control” are the perfect soundtrack for stage-diving, crowd-surfing and headbanging in a concert setting, where it is impossible to tell the band from the audience. The lyrics are provocative and can be a hard pill to swallow only if you don’t like hearing opinions that do not agree with yours. Careful now, I am not talking about force-feeding any opinion down your throat because this is flat-out wrong; I am talking about exposing yourself to all opinions and be able to form a well-educated one. What AFTERMATH are talking about in songs like “Gaslight” or “A Handful Of Dynamite” can be too much for some, but they can make you think. Musically, they follow the same chaotic structure that requires some getting-used-to. Once you go through the initial shock, you will start to untangle what AFTERMATH have put together and enjoy the ferocity, the aggression and the heaviness of this album. More Crossover is thrown at you with the album’s title track that I believe is the best way to describe what we are all experiencing in our daily life. For sure, there is something wrong...

There is nothing wrong with the “There Is Something Wrong” album and like I said, it feels totally relevant, even though it comes from a band from the mid ‘80s that decided to get back on the music-recording track. Can you take this figuratively blow or your ears have become too sensitive?