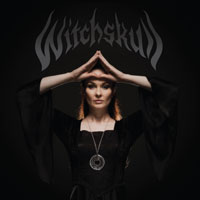 Channeling the spirit of Metal gods BLACK SABBATH, Australia’s Doomy trio WITCHSKULL is a natural fit to Rise Above Records’ classic Heavy and Doom Metal roster, with whom they delivered 2018’s “Coven’s Will”. Based on how good that album turned out to be, it was with big excitement seeing the needle dropping on WITCHSKULL’s third full length studio effort, titled “A Driftwood Cross”, to see what these fine gents come up with after working in their studio down under.

Well, the fuzzy, Doom Metal path has pretty much remained the same, although I have to admit during very first album spin, “A Driftwood Cross” sounded eviler and darker, fitting like hand in glove the mimimalistic cover artwork with the dressed in black priestess-like lady. Album opener “Black Cathedrals” kicks the door down in a “Children Of The Grave” manner, only a tad slower, and the moment Marcus De Pasquale’s soulful vocals show up (love all the Geddy Lee / Steve Hennessey colors here), WITCHSKULL start putting the pieces together with lots confidence and substance, demonstrating such an obscure energy that the Godfathers of Metal did have half a century ago – and that’s a great compliment in my book. “Baphomet’s Child” is another fine example of that, supported by a nice chunk of glorious riffage and dark menace, while “This Silent Place” proves to be a strong card up their sleeve with all the Groovy-ness and bravado you can imagine. Side A reaches the end with the needle going through the bass-driven “The Red Altar”, that I suggest listening with headphones to emerge yourself into beautifully mixed Tony McMahon’s basslines and Joel Green’s drumming (should we thank Jason Fuller for this?) which leave the appropriate room for Marcus to spit his dark-ritualistic lyrics, leading us straight to a Stoner bliss.

In case you’re wondering whether WITCHSKULL bring anything fresh / innovative to the table, tracks like the turbo-charged “Dresden” or “March Of Winter” speak louder than anything else. The former is a genuine headbanger ticking all the NWOBHM boxes, making me wonder how this one would sound in a live setting while daydreaming a huge moshpit, despite its short, Doomy SLEEP-esque break somewhere in the middle. The latter became one of my favorites for the same reason, although here, WITCHSKULL aren’t afraid to combine a solid dynamite-guitar riff with soaring vocals with the right amount of Groove coming from the bass / drums duo. And while all that is happening on side B, the sneaky, KYUSS-laden album-title track drops the curtain with a bang, leaving you after almost 6 minutes trying to realize what has just hit you... Awesome Heavy guitar work that doesn’t hesitate to go faster and faster when needed, blistering vocals, tons and tons of bass and drums; I dunno if the warm, fuzzy production made the overall result even more enticing, but man, WITCHSKULL mean serious business here, dropping the perfect hint for album number four maybe? Yup, I would like something more of that, please!

I believe you’ve already understood that I really dig this album (and its purple-colored vinyl version, ha!), and I bet it’s gonna grow even more on me; for the last two weeks, “A Driftwood Cross” is featured in my playlist on a daily basis to the point I started appreciating the complex in texture tracks more than the already released as lyric videos singles that I happened to love right from the start. If you thought that “Coven’s Will” rocked you world, wait till this one smacks you in the face. Highly recommended.