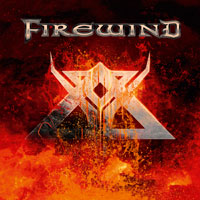 A new FIREWIND album and a new singer in the lineup... Well, the former is news, while the latter it kind of isn’t. You see, the singer position has turned into some sort of an electric chair for the band, and if you do your basic math, you’ll see it’s one singer per two albums. One could blame it to Gus G. but whoever knows him to the slightest, is sure that that’s not the case. To be honest, this does not really matter as long as the music (and the feeling) is there and is good enough to make us crank up the volume all the way to ten. So, is “Firewind” convincing enough?

Ha, you bet it is, and for me, it goes beyond that by pressing the ‘reset’ button hard enough but not that hard to mess with the FIREWIND sound. Granted, the identity of FIREWIND has always been all those finger-twisting riffs Gus G. is using to build the songs upon so rest assured that you will still get your Power Metal fix. However, and to my delight, Gus G. decided to steer away from serving a specific genre and has introduced all those cool Hard Rock elements that were kind of hidden in previous works. No, I am not saying that FIREWIND have gone soft, and “Welcome To The Empire” makes sure to blow away any shadow of a doubt by nurturing a fast tempo that kicks in after some intro-sounding guitar magic. Soon enough, the hard-hitting groove explodes with Mr. Herbie Langhans proving from the get-go that he has the right set of pipes to support, not only the new, but also the old FIREWIND material. I had the pleasure of watching Herbie onstage when AVANTASIA toured the US for the first time and aside from being impressed by his vocal abilities (he did the leads on one song), I remember thinking that he is a powerful frontman onstage. With this impression in mind, I am sure Gus G. has struck gold with him.

“Devour” shares the same amount of heaviness (it’s also a bit faster), but then has the vintage atmosphere stemming from Herbie’s Jorn-like singing and the subtle keyboards that remind me of the ‘80s. Add to this, the catchy guitar riff as it changes octaves like it’s the easiest thing to do, and you have another explosive rocker. Speaking of groove and being catchy, then crank it up during “Rising Fire” that would have been a great tune to blast in your local Rock bar, if we were not living during unprecedented conditions. Well, you can always make your living room your private / VIP bar and have all the fun in the world. After all, music is the ultimate vehicle to get away from almost anything that has been messing with your mood. Or you can enjoy a night summer drive under the keyboard action of “Break Away” with the rather mellow break, before hitting all the right spots with the fists in the air chorus. Damn, this is exactly what I meant about freeing FIREWIND from the rather restrictive Euro Power Metal genre. Before you blast me into smithereens for my statement, please listen to the early SCORPIONS-sounding “Orbitual Sunrise” (of the Schenker era of course) and the hard to resist “Overdrive” because of the “Headless Cross” drum intro and the Tony Martin-esque vocals. That’s right; Herbie has a voice with all these great references, and I will admit that the last time I was this impressed was when I heard Jorn for the first time (some decades ago). I hate going song-by-song but I could not help myself as this album has been on my playlist longer that it should for me to form a solid opinion. I mean, how can you not comment on the ‘sweet melancholy’ coming from “Space Cowboy” starting off with more SCORPIONS rhythm guitar before letting a sing-along chorus that – for sure – will lift your mood up in a jiffy…

There are many reasons for me to be happy with “Firewind”; first of all, it seems that the band has abandoned any thoughts about calling it a day (even though “Immortals” did pour fresh fuel in the FIREWIND tank), and secondly, the tracklist is full of inspired songs that fortunately will re-introduce the band to old and new fans alike. This is definitely an album to “Kill The Pain” with...