Ross The Boss - Born Of Fire 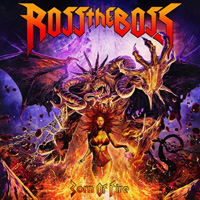 It can be pretty straightforward to make your mind up about an album, simply by looking at the band’s lineup, even before having listened to a single song. Generally, this is ok for maybe the first two albums, but it quickly becomes repetitive and consequently boring getting the same stuff (music) in a different packaging (record). Sure, I may end up buying the album only to let it gather dust and never see more action on my turntable. This could have been the case for “Born Of Fire”, if Ross himself was one of those musicians who like to chew on the same thing to no end like other bands have been doing (sorry, no name-calling here). After all, with these guys on the lineup, it would have been an artistic suicide not to follow their creative instincts.

I will admit though that I was already excited to lay my ears on the fourth ROSS THE BOSS album after having watched the band delivering the goods in concert and doing justice to all those MANOWAR hymns. Would I like to hear something similar in “Born Of Fire”? The answer is a bold ‘no’ because that would have been such a waste of talent. And with that in mind, I welcomed “Glory To The Slain” with open arms and a burning need to headbang. Damn, Marc Lopes sounds awesome, no matter the pitch and this is why Ross has let his guitar-playing to wonder all around the board. I mean, the tempo is fast but still has a rocking hard attitude that goes deeper than the easy things to like here. The tempo does not change in the tad more aggressive “Fight The Fight” where Marc spreads some Warrel Dane goosebumps, especially with his high-pitched screams. You should be able to recognize Ross’s signature riffs and then dig deeper on the rhythm section with Mike LePond shining with his bass playing.

Before the Epic Metal itch becomes too much to handle, “Maiden Of Shadows” comes to your rescue; the Irish flair of the horns-sounding keyboards bleeds into the chant-along worthy riffs in a grand way to get your blood boiling. On top of that, stands the absolutely fantastic bass sound that fits like hand in glove the galloping tempo. The minor orchestrations / choirs top this off with the appropriate ‘will not back down’ atmosphere, setting a strong footing on what we like to call as ‘True Metal’. I cannot imagine a future setlist without this one somewhere in the middle of the show, with fists pumping in the air. This should stand side by side to “Denied By The Cross” that already had its baptism of fire during the most recent “Hail To England” tour. I’m telling you, the groovy chorus and the pounding rhythm will get the Metal action going and climax during the double-bass drum action right after the guitar solo.

I could call “The Blackest Heart” as the underdog of the album, only because it is slower than the rest. Usually, it is the fast songs that get all the attention, at least during the first album spins but - trust me - this one is heavy as they come. Especially, the opening riff reminded me of Ross’ characteristic guitar work in “Gloves Of Metal”. Listening to the riffs in this one and they’ll put an evil grin in your face and then send shivers down your spine during the piano-sounding keyboards break  (with the sounds of a vinyl record playing) where Mike take a step forward with granite bass playing. On the same kind of feeling stands my album favorite “Undying”; there is a lot to love here, from the galloping tempo, the multi-character singing to the guitars that balance between Power Metal and Hard Rock. I hope this one will make it to the upcoming setlists although I will already recognize the difficulties in choosing what to add and what to leave behind...

If it was up to me, I would play the entire record live because “Born Of Fire” has successfully captured what the ROSS THE BOSS lineup cannot do from the stage. This album is packed with killer songs (aside from the ones I mentioned) and therefore it would be a shame not to give them some air time. Sure, that would mean to remove other “must haves” but at the same time ROSS THE BOSS is not a band that feeds from the past.

Ross The Boss @ The Forge, Joliet (US)

Ross The Boss - By Blood Sworn