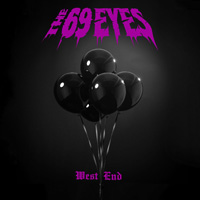 The combination of the black balloons in the album’s cover artwork, the rather pessimistic title and the miles this band has consumed during the 30-plus-year career may seem to some like an unquestionable precursor for retirement. That would have been the case, if “West End” had not seen the light of day (or should I say the moonlight) under the name of THE 69 EYES. Yes, this band keeps going but not for the sake of going... I mean, the five-piece band has been releasing awesome albums with this one being a celebratory one for the band’s 30th anniversary. So, is this the end? Or just the beginning of something new?

Well, having recently talked to Jyrki69, I know that “West End” sees THE 69 EYES entering the new decade of their existence with fresh fuel in their tank. It does not matter that the first thing you hear the moment the needle hits the purple wax (oh yeah, I got the special edition) is a death knell because the fast guitar groove is full of energy and Punk attitude - quite an antithesis, huh? Adding to this fast-paced cake, the familiar grunts of Dani Filth who shares the singing duties with Jyrki69, and you have a most interesting album opener that must open the shows for this touring cycle. The Punk attitude breathes through the sweet basslines, setting the stage for the heaviness stemming from the nice guitar hooks. No, THE 69 EYES have not changed their music-style, but they do have the urge to try something new and stir things up without dismissing their Goth Rock foundations. After all, the SISTERS OF MERCY-esque “27 & Done” has everything you have learned to love from this band. Maybe the album opener is to lure you in saying ‘come inside’ to these Helsinki Vampires before making you a THE 69 EYES devotee with the catchy Goth Rock. Damn, “Black Orchid” is one of those songs that you cannot get out of your mind even if you wanted to. And the same goes for the faster “Burn Witch Burn” (don’t you love these song-titles?) and the almost DANZIG-esque “The House On The Left” with the dominating basslines and Jyrki69’s Glenn-like grunts. Considering the Horror-themed lyrics, it makes total sense having Wednesday 13 doing some guest-singing, making this number another must-have on the North American tour. Oh yeah, that will be a fun one too.

The darker (or if you prefer Gothic-er) side of THE 69 EYES shines through Jyrki69’s deep singing on “Cheyenna” and on the slower and kind of sad “Death & Desire”. Pay close attention to the sound effects on the latter one after the killer guitar solo that has an almost mid-‘80s Hard Rock power ballad feel to it. Speaking of adding elements, “Be Here Now” adds some sitar table sounds into THE 69 EYES music, and before you raise a brow, know that it works extremely well. I mean, this is a catchy tune and will stuck into your mind like pretty much the entire “West End”.

With the sounds of the almost haunting melody of “Hell Has No Merchy” echoing in mind, it is time not to say goodbye, but rather celebrate the new decade with your favorite Vampires from Finland. “West End” is the best way to rejoice because other (and lazy/uninspired) bands prefer to release ‘best-offs’ instead getting their arses into the studio and try to release music that will not blush out of shame when compared to the first releases. Ladies and gents, this is THE 69 EYES.