Ross The Boss - By Blood Sworn 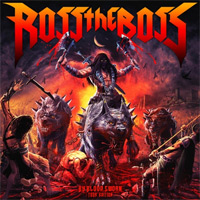 Since the gorgeous tour edition of “By Blood Sworn” was recently added in my vinyl collection, I decided to do what I should have done a year ago. I hate to admit that I missed my chance to review the album once it got out, but the gods of Metal offered me a way to redeem myself with this edition. After the rather useless background story, it is about time to see what ROSS THE BOSS came up with, eight years after “Hailstorm”.

Aside from the time in between, the biggest difference between the two albums is the lineup. For reasons rather irrelevant here, Ross The Boss revamped the lineup and, after seeing the band live, I have to say he did the right thing. These guys under the ROSS THE BOSS moniker know their Metal and – most importantly – know how to deliver it, putting raw power in the performance. In hindsight, the concert experience shed a different light on “By Blood Sworn” because now, I see (or "hear" is a better word) that the energy in the studio recording is by no means make-believe. The title track opens the album in an exploding-in-your-face way with Marc Lopes showing his sharp “singing-teeth” from the get-go. I have to agree with Ross The Boss on what he told METAL KAOZ about Marc being a brutal version of Eric Adams. I am sure I am flirting to sound sacrilegious to some die-hard fans out there, but the truth is better to be said raw without any sugar on top. This band, and especially this lineup, can deliver the Metal goods in a way that was done some decades ago… The silent force of Mike LePond has done his part handling the bass duties, and I am so excited to hear his work this high on the mix. The groove here carries the trademark MANOWAR sound of the first four albums, and frankly, I don’t give a damn if there are people out there feeling offended by this statement. “Among The Bones” has this Hard Rock feeling that Ross The Boss had in “Battle Hymns” and therefore, this is not the typical True Metal song. However, it does showcase that this lineup has a wider music-making arsenal than one would be expecting. In the same groovy-as-hell vein is “Devil’s Day” that could easily be the soundtrack for a motorcycle summer night drive (don’t let yourself get carried away with throttle, though). Damn, the guitar solo is sweet…

In case you have doubts about Marc’s singing abilities, then crank the volume up for “This Is Vengeance”. The high pitched scream will send shivers down your spine and will wake the Metal warrior inside you, no matter your age. The surprise of the album is the seven-minute long “Lilith” that goes all the way back to BLACK SABBATH and their dark and evil (early) days. The bass takes a step forward to underlines that atmosphere, so – again – extra credit is in order for the album mix. The subtle keyboards add to the atmosphere and, I think, make the song sound more current and less vintage-y. Although, I would be a terrible liar if I’d say that the guitar solo did not wake some “Into Glory Ride” memories.

To my mind, “By Blood Sworn” has opened a brand new chapter in the ROSS THE BOSS story, and considering that this lineup has been delivering MANOWAR setlists for quite some time, I have a strong feeling that the next album will be one level up from this one. Am I excited? You're damn right I am!

Ross The Boss - Born Of Fire

Ross The Boss @ The Forge, Joliet (US)