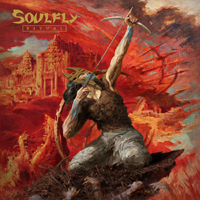 Soon after having started reading Max’s biography, I realized that I had completely missed the latest SOULFLY offering, titled “Ritual”. So, felling jacked up from digging into the SEPULTURA / SOULFLY history through Max’s eyes, I needed some music to get the edge off. After all, Max has been a trusted source when it comes to Thrash with tribal infusions which is focused on the groove. If you do not understand what I am talking about, then “Ritual” might be great starting point to being your trip backwards in time.

I am saying this because “Ritual” seems to carry all the things we have learned to love from Max’s riff writing hands with the level of aggression which shows no signs of wear and tear. And speaking off riffs, isn’t about time to recognized Marc Rizzo as one of the all-cylinders-firing lead guitarists? Oh yeah, it is, but this is not the time or the place to fully expand on this. The tribal percussion and chanting will get you in a “Roots” mood, drawing similarities with the almighty “Ratamahatta”. The aggression of the lyrics shines through the down-tuned guitar riffs and pounding drums and, on top of everything, Max’s trademark singing-style which was one of the ways how SEPULTURA marked their territory on the Metal map. Marc delivers an amazing guitar solo before letting the tribal vibe to take over and lead the song to a pounding ending. Yes, this will be a great way to start a live show. “Dead Behind The Eyes” writes 'Thrash' with capital letters and bold font, blasting off the speakers with a galloping rhythm and Randy Blythe’s guest growling. The groove shows its welcoming face during the chorus without losing the main focus which is nothing less than relentless Thrash. Feel free to use SLAYER as a point of reference for this one, but only until the tribal elements kick in to turn on the spotlight on the SOULFLY logo. Thrash was always opinionated and some years ago (or even decades), it was as rebellious as Punk was in its heyday. This way of thinking comes forth in “Evil Empowered” which deals about dictators hiding behind the politician’s nice face trying to get people’s support to fix all evil (and open the flood gates for far worse). The double-bass drumming, the riff attack and Max’s pissed off way of spiting the words into the mic do justice to the lyrics where I believe you may find some BLACK FLAG references in the “Rise above” line. Whatever the case maybe, this is another must-have on live shows and I can already see the circle pit going strong during this one.

“Under Rapture” features the second guest voice of the album; in this case IMMOLATION’s Ross Dolan pours some evilness in SOULFLY in a way that reminded me of the early MORBID ANGEL and this is said in the most positive way. The Punk-esque bass-led explosion preps the way for Ross to destroy the mic with his deep growls from hell and - brace yourself - for the hi-hat action that kicks in as the tempo slows down a bit. The flute melodies keep the tribal aesthetics alive in “Blood On The Street” which is another punch in the face the moment the snare drum gets into the Thrash mode while the hammer-ons and pull-offs on “Bite The Bullet” bridge the old with the modern SOULFLY. In fewer words, the awesomeness continues non-stop. Of course, a SOULFLY album should have a “Soulfly” track, and in this case it’s number eleven that I think breaks new grounds for the band bringing in some saxophone tunes. That’s right; SOULFLY are eager to push the envelope as far as their inspiration goes, and the “Soulfly” tracks are the perfect vehicle to do so.

I trust SOULFLY to deliver the goods from the studio, no doubt about that, but for some reason I did not expect to get punched in the face so hard with such a strong album. I guess I have gotten accustomed seeing long-running bands slowing down or even stepping off the writing-music train, but then again, Max was and will never be like the others.