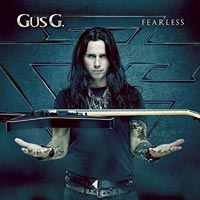 Come to think of it, when a guitar virtuoso releases a solo album, it mostly appeals to all those guitar addicts who know every scale and every arpeggio and are on the hunt for the next super-duper-complicated riff to melt their fingers on. Being on the other side of the spectrum (and just a humble air-guitarist), I find it difficult to digest such albums which usually fade away after some listening sessions. Having this in mind, one can only appreciate Gus G. for wanting to follow the other direction and create music to rock / headbang without losing that spicy taste of guitar-action for those who want it. This is still work in progress and one can easily track it down by checking how Gus G.’s songwriting has evolved from the days of “I Am The Fire” (I consider “Guitar Master” as a showcase type release). So, “Fearless” is Gus G.’s third solo LP attempt and I think the saying ‘third time’s the charm’ is definitely applicable.

Ok, that saying means that the first two attempts were unsuccessful, but the reality is that they weren’t. In fact, the first two LPs are really good with powerful songs but also with guest singers. And here is the main difference with “Fearless”; Gus G. teamed up with Dennis Ward and added Will Hunt behind the drum-kit, and formed a solid lineup which has already proven its worth with the most recent live shows. In case you have been living under a rock, please know that Mr. Dennis Ward has been doing magic in front and behind the soundboard and, on top of that, has a killer Hard Rock voice with a wide singing range. So, take Gus' Hard Rock education and mix it up with Dennis’ multi-character singing and strong lyric-writing hand and you’ll get “Fearless”. With that being said, I have to admit that “Letting Go” caught me off guard as it kicks the door down with a powerful riff and lots of double bass drumming. And that’s not enough; the moment Dennis starts singing, you get a strong Ozzy flavor that soon fades away during the melodic chorus. This song has strong Euro Power Metal ties but it does that with a wink as the Hard Rock vibe is cleverly hidden behind the headbanging drum assault. Dennis is also handling the bass duties and there are songs where his bass takes a step forward in the mix, as it happens in the opening lines of the foot-tapping “Mr. Manson”. There are some electronic effects sneaking up here and there, but they do not sound out of place. In fact, they add a modern finishing-touch, making it clear that these two gentlemen were not looking to make some nostalgia music, but forge ahead and create their own style.

Although, Gus G. has already established his guitar sound and you can hear this in the in-your-face riffs and in the solo where he uses a well-balanced mix between melody and fast-and-furious guitarmanship. Yeah, check the attitude of “Don’t Treat On Me” and the way it builds the groove with vocals that remind me of Jeff Scott Soto’s harshness. Gus G. takes his foot off the brakes of this guitar-playing with the instrumental “Fearless” which could be easily included in a FIREWIND LP, mixing heaviness and melody by pushing the scales either way without disturbing the flow. The bass here is not playing the guitar’s sidekick but has a nice volume in the mix when working the rhythm section when there are not multiple guitar layers.

My first encounter with the album happened without having looked at the tracklist, so I was not prepared for this cover, but the subtle keyboard melodies and the trademark drum roll revealed that Gus G. chose “Money For Nothing” for a total makeover... I have no idea how he adapted the legendary riff and DIRE STRAITS’s Mark Knopfler’s unique guitar-playing into his style and that is something I have to ask him... The cover itself is (of course) heavier, without messing with the original’s playful character. In fact, Dennis changed some words here and there, so be sure to listen closely to the lyrics, and I am sure you’ll have fun. By the way, the solo here is frickin’ awesome.

The groove of “Chances” will make you hum-along from the first spin and you may find some WINGER flavor in the vocals and then have some almost MAIDEN fun, just before the solo. Speaking of groove, you should crank the volume up as “Big City” enters with a riff that could easily belong to some Desert Rock band, although as the keyboards hit the scene, it gets back to smooth Hard Rock you love to hear on a Friday night out, or maybe for a long summer night drive chasing the sunset.

“Fearless” is the best album having the Gus G. name on the cover. After having it on repeat for awhile, I can no longer call it a solo-album, as it sounds like a band’s effort with a distinct character without having the music adapting to the guest-singer’s voice and style. I hope these songs will get more air-time in the band’s upcoming touring plans.

P.S.: In hindsight, I felt bad for not commenting on “Last Of My Kind” which the badass riff, but I kind of felt I had already said too much. Happy listening!