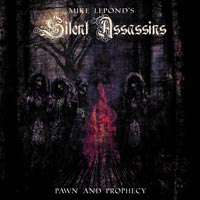 It is expected to mention the other bands that members of the lineup are involved with, especially if they are of SYMPHONY X’s caliber. Yes, bassist Mike LePond put together SILENT ASSASSINS, and yes, he is involved in the aforementioned Prop / Power Metal titans. However, this mention kind of sets the expectations of the musical content and identity of “Pawn And Prophecy”, so if this does not match the SYMPHONY X doings, then it can be discarded without trying much. For me, I would be totally disappointed if SILENT ASSASSINS were just an extension of SYMPHONY X because then, using a different band name is pointless, right? Fortunately and as it happened with the amazing SILENT ASSASSINS debut, “Pawn And Prophecy” comes to serve your Heavy Metal appetite with US Power Metal intentions and Progressive twists.

Come to think of it, the last sentence of the previous paragraph suffices to describe “Pawn And Prophecy”, so if you read the Metal genres you like, then get this one without overthinking it. However, using just a bunch of words to describe the three minutes shy of an hour worth of music would be an unfair deal so let’s dive in, shall we?

“Masters Of The Hall” lifts the curtain of this play, this album tells the story of Shakespeare’s “Macbeth”, and you can notice right away the epic atmosphere with the chanting and the fists-in-the-air groove. Soon enough, the fast drumming takes over and the song storms with guitar-based Heavy Metal without abandoning the US Power Metal roots feeding of Alan Tecchio’s wide-ranged vocals. Yeah, his storytelling-singing matches whatever the music is throwing at him keeping the energy at headbanging levels. The Organ melodies serve the theatrical aspect of the music by enhancing the dramatics without stealing the light from the hard-hitting rhythm section (you can enjoy the smashing bass lines there too) and the killer guitar leads. The album-opener may sound kind of predictable and at some extent it is, but only to lure you in. Because the moment “Black Legend” kicks in, you’ll know that SILENT ASSASSINS try to push the Power Metal envelope with some almost Hard Rock passages with the foot-taping rhythm and the rockin’ guitars leads during the second part of this one. The same goes with “Antichrist”, although this one is more of an in-your-face headbanger and that’s totally expecting considering its title... Make note to check this one using headphones to hear what Mike LePond is doing with his bass and all these sweet phrases. The melodic vocal lines after the guitar solo reminded me a bit of SYMPHONY X’s “Paradise Lost” and this is said in the most positive manner. The bass steps into the spotlight in a Joey DeMaio way during the intro of the amazing “I Am The Bull”. Think of Joey’s dark and heavy sound that he used to have in songs like “Battle Hymn” or even better on “Bridge Of Death”. I think that SILENT ASSASSINS sound heavier during the mid-tempo tracks where all the layers they are using in the songs have a better clarity and more room in the mix. Ok, the faster “Hordes Of Fire” does sound heavy with the fat rhythm guitars and the low to high pitch singing during the chorus. And then, “The Mulberry Tree” completely changes the scenery with a medieval appetite to that extent that BLACKMORE’S NIGHT came to mind (check the guitar solo, if you don’t believe me). There is no distortion here, with the focus being on the vocals and the awesome clean guitar melodies. This one can be easily considered as the prelude to the 20-minute-long title track, which is a massive piece, and despite its long time duration, it goes down really well. Epic is the right word to use for the first minutes of this one; the bass walks the same path with “I Am The Bull” and Michael Romeo does his guitar magic in a SYMPHONY X way. The guest singers serve the theatrical aspect of this song while the fast tempo keeps a strong footing on US Power Metal grounds. There are lots of tempo changes from piano-driven breaks, epic interludes and Blues passages... Yep, around the middle and after some guitar frenzy the song shed its Heavy Metal skin going Blues all the way. The female voices and the vocalisms in the background paint an entirely different picture without disturbing the flow that soon enough returns to epic Metal.

I am extremely happy that SILENT ASSASSINS was not a one-time thing, and with a brand new record deal delivered an equally awesome album with the debut. The depth of the song structures deserve more listening time, so be ready to invest more time than you usually do to get all the flavors served here. Is it about time to get this band on the road? Don't ya think?