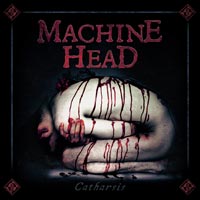 It is beyond the shadow of any possible doubt that these are seriously confusing times we live in. Politics have gotten everywhere with people mixing everything with everything [sic], having lost the ability to defend their opinion by simply analyzing / presenting their arguments. Ιt seems that almost everyone nowadays operates under the ‘it’s my way or the highway’ motto, throwing everything into the social blender where few characters are enough to express one’s point or (worse) ideas... Unfortunately, this confusion has infiltrated the Metal scene with people spending more time arguing about music than listening to it. I am sure you (will) see the point on this otherwise out-of-subject opening statement; MACHINE HEAD’s “Catharsis” has already faced a variety of criticism that to my eyes does not always stem from whether one likes or doesn’t the music.

Sometimes it is best to keep your focus on the music and the lyrics, and if those two make your clock tick, then you have a winner. The rest surrounding the band or specific members are simply food for the social media arena and - trust me - it is still better to trust your own gut as far as the music is concerned, keeping a safe distance from stories that you barely know that has really happened backstage.

“Volatile” opens the album in the MACHINE HEAD fashion, sounding aggressive and in-your-face with the simple yet effective lyric line “fuck the world”. Robb Flynn colors the lyrics with anger and frustration by spitting all the words like he is in the middle of a heated discussion, or a fight, if you prefer. The guitars are in the same vein with the post-“Supercharger” era, although there is more groove in the rhythm section in a way that you’d call this modern-sounding. “Catharsis” is cut from the same cloth and also features those minor orchestral arrangements that are responsible for the MACHINE HEAD-trademark dark atmosphere. The double guitars keep the blood pumping hard, although the aforementioned groove seems to have a strong Nu Metal footing, especially during the SLIPKNOT-eqsue break a few minutes into the second half of this song. At first, this part made me frown a bit, thinking that MACHINE HEAD decided to change their style (which, by the way, is their prerogative), but sticking around without rushing to dismiss this, “Catharsis” got stuck. Again, the sheer energy exploding through the lyrics, rhythm breaks and burning lyrics were enough to keep me listening. “California Bleeding” mixes heaviness and melody with catchy vocal lines and an awesome live feeling, while the smashing “Triple Beam” (yes, this is a borrowed term from a way different music scene) will send shivers down your spine, even though Nu Metal is on the spotlight. The only thing you need to do with this one is pay attention to how Rob is highlighting the lyrics which tell the story of so many wasted individuals who have been lost through society’s (huge) cracks. The climax close to the end of this song will make your skin crawl...

Ok, “Bastards” sounds like the odd one out and, to be honest, it brings DROPKICK MURPHYS to mind each and every time I spin it. And this is not a bad thing (I love the MURPHYS) but I think it messes a bit with the heaviness and the aggression the tracklist had been serving with the previous six songs. Or maybe it can be considered as a short break because after this one, MACHINE HEAD are back at it. It is funny though, because sound-wise “Behind A Mask” is mellower than “Bastards” being basically based on the clean guitar sounds and a mid to slow tempo, but has some powerful lines in the lyrics and these are enough to restore the heaviness. And then, there are the almost ten minutes of the amazing “Heavy Lies The Crown” that sneaks up on you with the symphonic orchestration before stepping off the shadows following Robb’s most expressional narration-like singing. Again, the tension builds up and let’s the guitar distortion and pounding bass & drums take it to the finish line, with all guns blazing and all heads banging. The guitar leads during the song’s second half prep the way for some mosh-pit action.

To my surprise, the louder voice of Nu Metal in “Catharsis” did not make me turn my back on the new MACHINE HEAD album. The album is rewarding from the way it lets the energy buildup to find an outlet through the pounding music and the angry lyrics which, unfortunately, are inspired by nowadays’ happenings. I have no time for further analysis, especially whenever the music speaks to me in the way it did when Metal was my only voice to respond to society’s way of living / thinking / acting / being...