Trespass - Footprints In The Rock 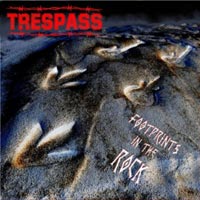 Of all these reformed bands who were a part of the dawn of NWOBHM, TRESPASS stand out as unique in the bunch. First, because their music, even back in the day is a fantastic mix of '70s and '80s Metal loaded with good melodies and fines. Also, that they gave the business a try in the '90s and released, at that time, contemporary sounding “Head” record. Perhaps not what was wanted from a band like TRESPASS but it's a very decent record and it's not that TRESPASS were the only ones adapting to the trends at that time.

Brand new “Footprints In The Rock” contains the same ingredients as the '80s material did topped with close to four decades experience and development. We're still talking about strong melodies and smart songwriting and should create its own footprints in the Rock, the music world. Opening “Momentum” sets a good standard from start. The up-tempo track with an easy chorus-line should be perfect for the stage. For me though, melodic “Be Brave” strikes harder; the vocal lines, both in the verse and chorus are fantastic and there are witty details on the guitars constantly in the background. The balance of still having it all heard but not take over from the vocal melody takes some work, TRESPASS definitely succeeded there.

“Mighty Love” holds the same fine details with “Be Brave” but leans more towards the opening track when it comes to tempo and beat, bringing the best from two worlds together. The title track is one of my absolute favorites from the album. The way it turns from gloomy verse, raises some hope in the bridge into a very good and catchy chorus-line makes me reach for the volume and it can only go upwards. This type of creativity and dynamics is what many of these old school bands are good at and just a little of it makes the music much more vibrant. Ok, TRESPASS' music isn't that simple; there are a lot of things going on behind the vocals, riffs and harmonies to build the dynamics and feel. All of this is what will make the record last on long term too. Another favorite is raw “Beowulf And Grendel” which sounds more like American (early) '80s Metal than the band’s NWOBHM roots. There is some Randy Roads riffing in there which makes the track airier as compared to the rest. And it works so well towards the Heavy and dark half-tempo chorus.

There's no doubt that I like TRESPASS' “Footprints In The Rock” album. But, because of the production, it takes a bit to get into it. It's not bad but it feels primitive. I really don't like the modern super-pushed sound - it's not what I'm after. But the music on the record is much better than it sounds. Also, Mark Sutcliffe's vocal register is a little limited. He has a good voice but with the whole sound it's partly lost. It's such a shame - else I really love an old school organic sound. It all feels very honest and there's no doubt you'll get exactly what's expected seeing TRESPASS live. What I am trying to say; if the sound bothers you listening to this else fantastic record, leave it on until you get used to it. It's definitely worth the effort.