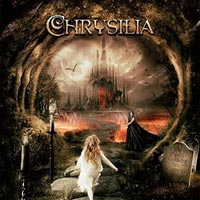 No matter if you are a fan or not, you have to agree that Heavy Metal is one the most versatile music genres being able to match, mix and adopt elements from other scenes without sounding forced. Also, by bringing different music styles in the same melting pot, has spawned new Metal sub-genres that continue to branch out as far as the artist’s imagination wants. One of the most challenging marriages is the Symphonic Metal genre that sounds a bit saturated with bands pretty much following the same (and already successful) recipes. Fortunately, there are still bands out there inspired to take things one step farther and write music out of inspiration and not out of the will to make it big. Greece’s CHRYSILIA belongs to the former group and “Et In Arcadia Ego” is their first full length offering which has nothing with being the regular band debut...

...because the music presented among the ten recordings has a specific character and a clear direction, meaning that CHRYSILIA are not experimenting or trying to find their identity. “Et In Arcadia Ego” is a concept album and, just by looking at its cover artwork, it is safe to assume that Symphonic Metal is CHRYSILIA’s deal. And that does not fall far from the truth, although I think the music is more pompous and dramatic than in the average albums of the same genre. You will definitely hear this as “By The Gates Of Ypsus” starts lifting the curtain with the choirs and the dramatic keyboards building a theatrical play setting. And then, the guitars enter the stage bringing along a headbanging groove, justifying the band’s Metal backbone. At first, NIGHTWISH come to mind, although CHRYSILIA’s style is more classical with the romantic element being more prominent. I think the music was made to support the story and also, Chryso’s performance falls far from the cliché soprano / Metal female-singing. If I was to describe her vocals with a single reference then, that would be Candice Night with a lower pitch. You should be able to trace this in the Renaissance-sounding “The Menalon Trail” which will also ring the RHAPSODY epic bell but in a less guitar-complicated way. The slower “Desperate Wings” is more appropriate to appreciate Chryso’s vocals which tip-toe on Folk territories helped by the string arpeggios and the awesome violin-guitar solo. There is depth in the song arrangements and a careful listening will reveal all the layers CHRYSILIA have put in every song and I will use the album’s title track as an example. The theatrical AVANTASIA-esque arrangement enhances the dramatic / romantic atmosphere before exploding in an epic “Pirates Of The Caribbean” Hans Zimmer-way. Ok, the Metal character is hidden behind the orchestral arrangements and this proves that the band was not forced to mix Metal and symphonic elements in equal parts just to maintain the balance; this was what the story needed. The album gets heavier with “Altar Of Silence” (the vocalisms are so catchy in this one) and with the surprise cover on ROTTING CHRIST’s “King Of A Stellar War”. Yeah, this is not a typo; CHRYSILIA have recorded a ROTTING CHRIST cover and did so with grace tailoring this headbanger with keyboards, strings and female singing in their style - just killer!

“Et In Arcadia Ego” is not the typical Symphonic Metal album, and for this reason it may not appeal to the die-hard fans of this genre. CHRYSILIA go beyond what is considered norm for this Metal genre and have the confidence to support their pretty unique style. Approach this album without specific expectations and you will definitely enjoy the trip to Arcadia.