Mausoleum Gate - Into A Dark Divinity 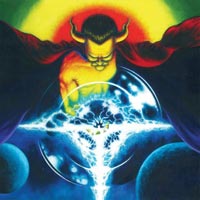 It's not often I get super impressed with a band from the first spin, but when MAUSOLEUM GATE's music first appeared in my flow on Facebook page, I was blown away. Both “Lost Beyond The Sun” and “Magic Of The Gypsy Queen” sounded fantastic in their simplicity. I kind of liked the primitive sound and live feeling. But when it didn't rise above the recording when MAUSOLEUM GATE played ‘Keep It True’ in 2015, it was a bit of a turn off. Which made it a great surprise that they delivered exactly what I wanted to have from the band at ‘Muskelrock’ in 2017. Maybe, the more intimate environment did them good but it got just as nerve tickling and vibrant with that somber Hammond and fantastic melodies. And of course, that was what I was hoping for; that “Into A Dark Divinity” would serve as well. But we're back to the primitive, live-ish sound again. And it's nothing wrong with that. The songs should speak for themselves, but when it takes a few rounds to get into the right mood for the music, there's a risk the records to get bypassed just because of that.

What MAUSOLEUM GATE is fantastic at is to create nice melodies and build up a slow-moving groove. Extensive “Condemned To Darkness” is a perfect sample of this; it's long and moves over multiple passages but still feels like a unity. And it's these massive tracks I appreciate the most, like the closing as well as title track, “Into A Dark Divinity” where the build-up is fantastic. Simple melodies, dreamy harmonies which make your mind wander. Also, heavy “Apophis” builds up very nice with the fateful vocal line towards the very heavy BLACK SABBATH-type riff working perfectly. But compared to the other epics, this feels sprawling towards the end, section after section is lined up and it doesn't feel like there's a red thread and also, the fast crescendo in the end just feels like a mess. “Solomon’s Key” confirms the MAUSOLEUM GATE sound even more. A bright riff and melody which changes over into a very mellow and melodic verse. The way the Hammond is used is amazing. It's soft and Heavy at the same time and this really make MAUSOLEUM GATE's sound unique.

But as I’ve already said, there are a few things I think would benefit MAUSOLEUM GATE - on record, at least. Up-tempo “Burn The Witches At Dawn” is very catchy but it could have been even more striking with a fatter choir in the chorus. I like the drama in V-P Varpula's voice and in the mellow and melancholic parts he's fabulous but in the more aggressive sections, it feels a little weak on occasion. I understand this thing of not recording anything you can't do live, but when hitting the stage, the volume will help out and increase the intensity anyway. So, Finnish MAUSOLEUM GATE's second full length album “Into A Dark Divinity” is a good one; there is some fantastic music on it, but it would have struck even harder if the record would hold the same oomph they delivered at ‘Muskelrock’.