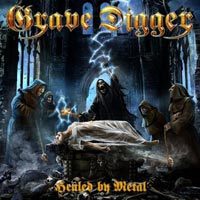 Sometimes it is entertaining to read the comments of all those keyboard warriors, who have the attention span of a goldfish, expressing their opinions about a new album based on a couple of listenings of one song. In these online battelfields, GRAVE DIGGER have been accused for being ‘predictable’, ‘cheesy’ or whatever. On top of all this, there is the band’s new LP titled “Healed By Metal”, so I am sure more ‘trolls’ will find an online podium to make their case, right?

Well, I won’t even try to say that GRAVE DIGGER are playing something other than straightforward Heavy Metal with fist-pumping rhythms, anthemic choruses and perfect for concerts songs because this is exactly what they have been doing for more than three decades now. “Healed By Metal” will definitely not change this and, in fact, is more [sic] straightforward than “Return Of The Reaper”. Yeah, the title track that opens the album has everything one would expect from a German Heavy Metal band; sing-along chorus lines, pounding mid-tempo rhythm section and Chris’ screaming / growling singing. The song’s structure also smells like it’s the '80s all over again, and if you have been following this band before the concept-albums streak (i.e. the pre “Tunes Of War” era), then you should feel happy spinning this one. I mean, the main-riff of “When Night Falls” screams GRAVE DIGGER all the way and even though this may be a turn-off to some, I love Chris’ German pronunciation when he sings these English lyrics. It is also amazing how Axel’s guitar playing has merged with the GRAVE DIGGER sound and I will use the fast and pounding “Lawnbreaker” with the nice vibrato in the chorus as a solid example. The early ACCEPT references are still there as well as the JUDAS PRIEST ones like they had been on all of the band’s first six albums. Songs like the solid “Call For War” with the awesome lead guitar action, the audience-pleaser “Ten Commandments Of Metal” where the cliché lyrics (“keep the faith, stay true”) and the double-bass headbanger “Kill Ritual” (check the killer riff during the chorus) will wake up the Metal warrior you had inside you when you were a teenager and going to a Metal show was the only thing you discussed one week before and one week after the concert.

“Healed By Metal” carries all the GRAVE DIGGER trademarks with pride, and will satisfy all those longtime fans who know exactly what they’re looking for. And that is straightforward Heavy Metal 101 with the German seal of approval on the back. To me, GRAVE DIGGER is a band one metalhead can rely on that will deliver the goods with every LP. Although I have to admit that the bass intro of “Laughing With The Dead” kind of left me craving for more from the band’s epic / concept back-catalogue.