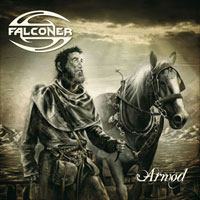 Honestly, I was not expecting a gem from FALCONER since I had lost my interest for them with the last releases and the going back and forth with the singer. But these initial feelings for the Swedish band kind of worked in favor of “Armod” which turned to be a very good album. First of all, I have to admit that once again I was confused by the accompanying promo sheet that explained why FALCONER decided to re-join forces with Mathias Blad and that “Armod” is not the band’s new musical direction. “If a band wants to experiment with its musical id it would be better do it under a different name in order not to confuse the fans” was my initial thought before hitting the ‘play’ button. The promo sheet adds: “…is an album where they pay tribute to the influences of folk music”. So, let me straighten things out before you start feeling like I did in the beginning.

There is nothing folk in the album opener “Svarta Änkan” that kicks in with a fast guitar driven tempo welcoming the trademark FALCONER vocals. The band decided to use the Swedish language in the lyrics and, at least for me, this is working great! Actually, this is the only folk reference I could find in this song that carries all the FALCONER characteristics; the melodic yet catchy vocal lines, the distinct guitar riffs and the hum along solos. This is a great song to open an album! In the mid tempo “Dimmornas Drottning”, FALCONER sound epic and here the Swedish pronunciation works even better, while in “Griftefrid” the listener is served with a fast Heavy Metal tune with galloping rhythms and an epic atmosphere to die for. The fact that the band did not use keyboards has revealed a hearty and heavier sound profile that I have to admit I like it better when compared to the previous recent releases. I feel there is a distinct character here and, even though the band considers this album as “one off”, I think it is more FALCONER than they think. In “Herr Peder Och Hans Syster” there are some female vocals with a timbre that is absolutely fitting to Mathias’ reading, while the violin sounds in the instrumental “Eklundapolskan”, brings the band closer to the Pagan Metal scene with bands like ENSIFERUM to give you an idea.

As a conclusion, I have to admit that I feel sad that this is an album far from FALCONER’s musical indentions. I think this is a territory where the Swedes could deliver more and I would dare to say they should continue working on their native language. But, who am I to tell them what to do; after all, they were the ones raising the red flag that this is an exception to FALCONER’s discography…

PS: “Gammal Fäbodpsalm” is an epic instrumental and the church organ sounds great!