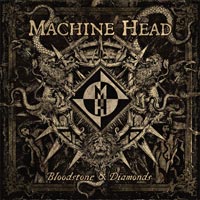 I won’t pretend I was a big time MACHINE HEAD follower but I will admit that I was drawn to their post “Supercharger” albums. In fact, every LP that has come out since then it’s awesome, so I was extremely curious to see if “Bloodstone & Diamonds” will follow the same winning recipe or maybe choose to do something different. Also let’s not forget that the ink they used to sign with Nuclear Blast is still wet, so can this be another turning point for the US band? After all, there are still metalheads out there who still believe in there are still enough money in the music industry to ‘buy’ a band...

Fortunately, “Now We Die” shows the album’s teeth from the start, presenting a recharged band that still has the post “Supercharger” Thrash ‘n groove attitude. The violin intro welcomes the dark atmosphere that is expressed by a pissed-off and also a non-compromising attitude. In fewer words, MACHINE-fucking-HEAD are back and have all the cylinders firing at full capacity. The sound production seems to play a huge role here, since the recording is more organic and less compressed, so be prepared to see your shocks getting knocked off by the powerful drums and awesome bass lines. Robb Flynn is singing in-your-face, spitting the lyrics like is the only way to vent all the hatred and the frustration of the days we’re living. The slow break is a killer and really I cannot take off my mind these lines as the music and Robb’s singing build up the tension once more: “we are strong and they are wrong” - perfect. Following such a powerful entrance, one could easily guess that the album doesn’t get any farther, and this would be a total misjudgment. Leaving behind the MACHINE HEAD trademark groove of “Killers & Kings”, comes the hair-rising riff of “Ghosts Will Haunt My Bones” that spices things up by mixing the groovy outbursts with down tempo and dark breaks. By the way, during the slower parts, the drums (love the high hat) and bass are to die for.

There are no weak links on this stainless steel chain but there is a couple of songs that stand one step forward for different reasons; “Night Of Long Knives” for the Punk guitar chords, the almost blast-beat breaks and the sing-along chorus, “In Comes The Flood” for the moody atmosphere (those violin sounds again) that is transformed into anger through the caustic lyrics and the epic ending, and last but definitely not least, “Sail Into The Black” for the slow tempo mysticism (oh my goodness, those opening vocalisms!) and the clenched-fists climax that is expressed and highlighted via the Black Metal-esque riff break. Still, the most powerful song of the album is the slowest one; “Damage Inside” seems like a really personal track that many of us can resonate with, so listening this with headphones is a must, so you can get a full taste of everything that is happening in the background, wrapping the clean but most expressional vocals.

To me, “Bloodstone & Diamonds” sounds like the final stop of what has been growing inside the artistic mind of MACHINE HEAD. I mean, it feels like they took all the good things from the previous albums, added some new stuff, and made this dynamite. There is no point to resist the energy surge coming from every song, so let it soak you and then scream your way out - after all, reaction is the best form of action. Just remember to use “Game Over” as the breaking out song and you will be rewarded (relentless headbanging is also included).