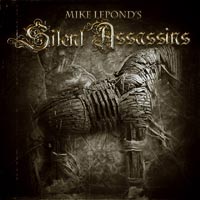 I love when an album surprises me and throws all my instincts or hunches down the drain. I mean, no one would blame me for expending MIKE LEPOND'S SILENT ASSASSINS to just be a Progressive-wannabe album with the exception of the bass being on step forward, right? If you still don’t follow my thinking, then have a closer look at the lineup and you will discover Michael Romeo there, so where is Russel Allen to make this a SYMPHONY X album? But no, Mike LePond had other plans for this project and I am glad he did because “Mike LePond's Silent Assassins” is a killer, no doubt about it.

Yeah, the Progressive masks are off (if there were any to begin with) with the album opener “Apocalypse Rider” where the old-school Heavy Metal is the main and only course. Ala Tecchio is also ‘responsible’ for this explosive opener that is fast, heavy and melodic all the way. The double guitars have some early JUDAS PRIEST quality while the bass is just perfect on the mix; not too strong and not totally buried as it usually happens nowadays. Ok, you may find some SYMPHONY X references in the chorus but that as far as I am willing to go because the rest of the album is amazing US-raised Power Metal with a hearty epic dosage. And that is not all; the album is far from being single-minded and has the kind of diversity I like to call inspiration and feel free to use “Red Death” as an example of my saying. The bass melodies that open the song work as a nice intro before the letting the fat rhythm guitars mark the headbanging time but - trust me - gets better as the tempo gets faster. “The Quest” enters with an equally awesome intro (organ-like keyboards) and then goes epic with clean guitar arpeggios before stepping on the gas and I swear I saw some VIRGIN STEELE type of heaviness and I should also mention MANOWAR (early of course) as another reference during the bass-lead break. And I’d love to find out the origins of the melodies during the clapping part where Mike does more four-string magic. “Massada” is cut from the same epic cloth, even though Alan Tecchio is the star here with some powerful and melodic vocal lines that push the song into the next level and I am sure you will be humming if not singing along the chorus pretty soon - just awesome. The lead guitars are split between Mike and Metal Mike (too many Mikes, huh?), so I have no idea where to point the credits for the Ross The Boss-type of opening riff in “Ragnarok” that just happens to be another killer track while allow me to say here that nothing is overdone here; not the guitars nor the bass and everything is balanced, so I think I’d prefer the band to be called just SILENT ASSASSINS. Anyway, names do not count much especially when music speaks louder than words like it does in the eleven minute long “Oath Of Honor” that is a classic US Power Metal track. From the spirit lifting melodies, the driving tempo to the yet-again stellar performance of Alan Tecchio and I cannot help to mention again MANOWAR as a point of reference here (of the “Glove Of Metal” era; yeah, it is that good).

This album can be easily considered as the surprise for 2014 because it comes from a project and not an actual band. I just hope now that “Mike LePond's Silent Assassins” will also see a vinyl release because this type of Metal sounds way better when spinning on a turntable - especially the bass. But I am digressing, so get this one with eyes closed and ears wide open.