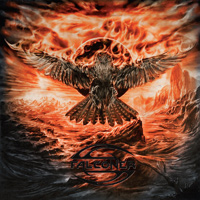 FALCONER have been on my radar since day one when they released the self-titled debut with “Mindtraveller” being the absolute tracklist’s highlight. Yeah, the striking RUNNING WILD references and the characteristic way of melodic singing, courtesy of Mathias Blad, were the two reasons I have been monitoring the Swedes’ doings all along. And if you look at the band’s back-catalogue, you will see only very good albums with “Grime vs Grandeur” included despite the change of singer and of music-composing direction (less Folk elements and more Power Metal oriented). Anyway, the story says that Mathias did return in FALCONER and “Northwind” was the release that restored the Folk Metal balance. Three years after “Armod” and its Swedish lyrics, FALCONER are back with “Black Moon Rising” sounding refreshed and recharged, so let me tell you why.

“Locust Swarm” opens the album fast and heavy, being driven by hearty double-bass drumming, nice high-hat action (kudos to the production by the way) before entering into the well-known FALCONER realm shining through Mathias’ trademark singing. Of course, the chorus is catchy, so get ready to raise your fist and sing along doing justice to the Folk side of the Swedish band. The riffs are still crucial to the FALCONER music, so there is an abundance of them where you can hum along if you feel so. If I was responsible to choose the album opener, I’d go with the title-track that after the drum-driven fast start, explodes with plenty of RUNNING WILD references, especially in the rhythm section. The fat guitars combined with the awesome leads paint images of rough seas and brutal fights under Jolly Roger. But no, this is not a Pirates-themed album and I have “Scoundrel And The Squire” to back me up with the medieval vocal melodies and the epic riff that follows. Yeah, this is the trademark FALCONER sound, so I am sure the die-hards will rejoice, especially during the yet-again chant along guitar leads. “Wasteland” may catch you off-guard entering with almost blast-beat fast snare action before letting the guitars do their magic and Mathias to deliver more catchy vocal melodies. I have no idea if this was done intentionally but to my ears this blend of heaviness and melody works like a charm and, most importantly, proves how motivated / inspired was before entering the studio. It’s like watching the pieces of a puzzle falling in place as you enjoy the whole picture taking its final shape. “Dawning Of A Sombre Age” will stir away from the album’s general heaviness with awesome rhythm section (some sliding can be also found here) and very good Hard Rock-styled backing vocals. The tracklist shows no signs of wear and tear as it drops the curtain on a high note with the potential hit “The Priory” carrying with grace all the FALCONER characteristics; sing-along lead vocals, riffs to guide you to battle and fast drum action that is the icing on this cake.

Although I hate using clichés, I’d say that FALCONER have returned with all guns blazing. I guess the break after the release of “Armod” was well-spent and now the band sounds absolutely fantastic. If for some reason you missed this band, then “Black Moon Rising” is the perfect chance to fix this and then you can walk backwards through the rest of the discography.