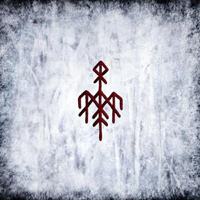 There is no doubt that WARDRUNA’s involvement in the soundtrack of History Channel’s TV series “Vikings” (this is a really good one) gravely increased the band’s publicity, even though many consider Ambient music as challenging. Indeed, this type of music can be challenging only if you have placed limitations and boundaries to your taste. You see, music is another way of expression and I am not only referring to the artist; the listener can change his emotional state or can express emotions and even thoughts while his brain is getting stimulated by music. In other words, music works pretty much the same with reading as it triggers your imagination and in many cases helps you focus, relax or vent your darkest emotions. So, in this context comes WARDRUNA’s debut album “Runaljod - Gap Var Ginnunga” that is being re-released on vinyl. The rhetorical question that immediately pops in mind is "can you think a better format to deliver and enjoy the nature­-based music that is inspired by the Nordic mythology?"

“Runaljod - Gap Var Ginnunga” is the first part of the planned Runaljod trilogy that describes in a sense the 24 runes of the Elder Futhark. Of course and I didn’t have any idea about this before dealing with the Norse band but I think we all agree that the Scandinavian culture and mysticism have played (and still do) a major role in Metal, no matter the genre. As you can expect, this is not a Metal album and this means no guitars or bass while the singing and the percussion have a way different role than we are used to. This is Ambient music and this means creating atmospheres and helping the mind to set up landscapes or even entire storylines based on the sounds and often the ritualistic-type music. Yeah, this album's music will appeal to your primal instincts, push you closer to nature and may help you to wake up the warrior who lies dormant inside your digital-infested brain.

There is a wide variety of songs in this album that can play a different role satisfying your needs; “Hagal” will guide you inside thick and old forests right in the middle of autumn and let you rejoice with nature as you become one with the sounds of rain letting the repetitive drum sound and the flute melodies clear your mind from the modern way of life. The tension is slowly building up as the whispering-vocals and the violin-like tunes of the Hardanger Fiddle are putting the finishing touches in the Viking-inspired atmosphere. With each song you'll dive deeper in the ancient Norse world, so listen closely to the mouth-harp sounds and the chanting-like singing of “Bjarkan”, resonate with the ritualistic rhythm of “Heimta Thurs” and the awesome multiple vocal harmonies of “Jara” before painting your face with bright colors and prepare for battle during “Kauna” (the horn tunes really get you in this mood).

“Runaljod - Gap Var Ginnunga” delivers exactly what it says; Norse-mythology inspired music that is strong enough to create images and - why not? - be the perfect soundtrack for book reading leaving on the side the digital media for a change. I can imagine myself spinning the vinyl during a nice summer night, drinking red wine close to a fire pit. Are you up for the challenge?