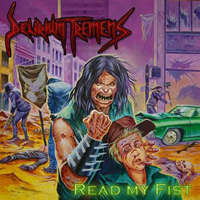 Even if you're not familiar with the German band DELIRIUM TREMENS, you can guess what they are playing by just taking a look at the cover artwork: spikes, dead bodies, smashed cars and windows, an apocalyptic scene and an evil guy holding someone who has no eyes. Do you really need more proof that “Read My Fist” is an old-school Thrash album? DELIRIUM TREMENS is not a young band that was formed in Bavaria (DE) in 1996 and has released two studio albums, a demo and an EP. Now, after eight years of silence, the Germans decided to return and to drop their third bomb out there.

“Read My Fist” is an album that every sold-school Thrash fan will enjoy: full speed assault on every song, killer guitars, bass and drums, insanely fast solos and lots and lots of groove. I guess this is why the band describes its sound as Thrash 'n' Roll. The Germans follow their home country's Thrash tradition drawing influences from behemoth bands like SODOM, DESTRUCTION, KREATOR, TANKARD, although there are some parts where you can think of SLAYER. What I really enjoyed in this album though is that the music incorporates also elements of the Teutonic Power Metal, which makes it even more aggressive and pompous. I mean there are some parts where I thought I was listening to GRAVE DIGGER.

“Read My Fist” is a solid Thrash album that you will fully enjoy, especially if you are a fan of this genre. Eleven songs full of passion and energy that will sure make everyone headbang and mosh and sometimes this is all it takes to have fun. A highly recommended Thrash album.