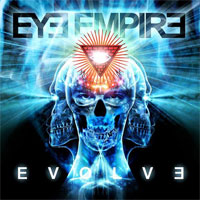 “Evolve” is the second album by EYE EMPIRE and I think the title reflects perfectly the music delivered in the 12-piece tracklist because the band has taken steps forward. The US band has stepped on the success of the debut “Impact” and used the gathered momentum to create a stronger successor. If you research a little the musicians of the lineup, you’ll see that they have done several tours of duty, so you can as well delete the rookie term when dealing with these guys .

If you have no idea about EYE OF EMPIRE, then it’s fair to say that they belong to the modern US Metal scene. And this means ultra-groovy rhythms, characteristic singing and a ton of catchy breaks and melodies. So, if you are a traditional metalhead, you can skip this presentation because most probably you’ll not get your fix. On the other hand (and if you don’t care about labels), “Evolve” is perfect for high-volume listening with a beer in hand and lots of space to headbang. Yeah, “One Day” has all this packed in the double-bass drum action (there is a WHITE ZOMBIE feeling here) and the wide ranged vocals by Donald Carpenter. You might as well start thinking of SLIPKNOT or a heavier version of STONE SOUR until the slower break reveals a nice Southern touch in the singing parts. “Rise (Wake Up)” comes with many flavors, so you can add to the previous band references GODSMACK but always have the Southern breeze blowing over the riffs and Donald Carpenter’s multi-character singing. Ok, “Beyond The Stars” is too melodic and too modern for my taste but has all the potential to become a radio-hit (or an iTunes hit) with catchy chorus and the kind of groove that many call Alternative Metal. “Within” comes to restore the heaviness-balance with a strange breed between GODSMACK and DISTURBED. Yeah, this is a powerful combination, so you can headbang following the leading riffs and throw your fist in the air and sing-along. I guess, Carpenter’s characteristic timbre and articulation has that Draiman effect, and to my understanding this is a plus.

The minimal yet most effective electronic samples in the background are enough to grant some SLIPKNOT references as it happens in the heavy “Weakness” and the ultra-groovy “I Can’t Forget”. Sure, the slower ballad-like “The Man I Am” or the piano driven and hidden-track “I Don’t Want To Leave” push the too-modern-for-me detector off the charts, but are strong indications of the composing capabilities of EYE OF EMPIRE, so I am sure things will definitely go better and better with every album.

“Evolve” is a step forward for EYE OF EMPIRE who have gained a lot of confidence in their writing as compared to the debut album. I guess a EYE OF EMPIRE concert is in order for me to check how this energy-flow is translated from the stage.